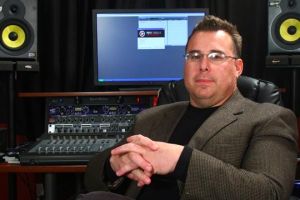 For Paul Schneider, owner of Rundown Recording Studios in Topeka, nothing less than the best is acceptable. Since Jan. 2009, when he opened up shop at 2515 S.W. 6th St., he has set a precedent of never settling for ‘good enough’ with the music he produces.

Schneider, who splits his time between producing albums for bands, being a full-time firefighter in Lawrence and writing his own music as a solo artist, takes a perfectionist mentality with his work. As a matter of policy, Rundown Studios refuses to produce anything less than radio-quality songs, including demos.

“What my goals are, much like Gizmo Pictures and other places in town, I feel that if we as artists, because really being an engineer or producer is an artist on this side, if we agree not to produce sub-level material then we will give Topeka or wherever we live a name in that industry, in that art,” said Schneider. “So instead of just taking peoples money and just giving them ‘good enough,’ I’m not a ‘good enough’ guy. It’s never ‘good enough’ for me. If I can get a little bit better, I’m gonna get a little bit better. So my future plans are literally that, just to continue to try to push the envelope so eventually, instead of people going to Nashville to record, they come here.”

Schneider, who taught himself how to record music by trial and error, said his goal for perfection the reason he doesn’t hire other engineers or producers.

“I don’t take on other engineers or producers, I’m real picky about how it sounds, and part of that is because I am self-taught,” said Schneider. “I didn’t go to school for this, but a lot of times I am the kind of person that feels that school sometimes can cloud you with its own perception of what you should know. For me, I wanted to know what I wanted to know.”

He began his recording experiments with his own music, but was soon being asked by other bands and musicians to work on their projects. Eventually, his workload got to the point where he decided his hobby into a business. Prior to moving into his studio, Schneider attempted to do the recordings remotely, ultimately deciding he needed a studio to meet his production standards.

“Mixing is hard enough anyway,” said Schneider. “Every instrument has its own timbre, every kick drum has its own timbre, every band is different in the manner that they perform, and so not having a set and stable location to record in means that you’re constantly trying to reinvent the wheel at every gig. I just needed a more stable place, and so I started doing it at my house and then my wife kicked me out, and so I opened up the static studio.”

Since then, Rundown Studios has produced albums for a variety of bands and genres, including rock, metal, Christian music, classical, Celtic music and rap. Some of the bands Schneider has recorded for include Monk’s Wine, Head Change, Crisis 3.0, Order Number 11 and NeoCircus. The studio recently finished up production on the Dead Sevens’ debut album, “Alienated,” and is currently working with the band on a follow-up album. Schneider said he occasionally had to turn bands away if they weren’t ready yet to produce a quality album, but that most of the bands that he’s encountered have been musically sound.

“I have been really lucky in the fact that the majority of bands, I would say that 80 to 90 percent of the bands that have come here, have already been pretty well polished and ready to go,” said Schneider. “So I’ve been able to work with some really good artists who haven’t needed that development before we start that process.”

Check out more about Rundown Recording Studios on its website at www.rundownstudios.com