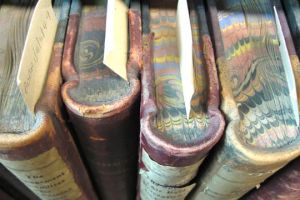 Erby grew up in the Midwest and moved on to Ohio State University for undergraduate degrees in English and history and then to Emery University in Atlanta, Ga., for a doctorate in American history.

Even as an undergraduate student, Erby loved writing and researching. At Emery, Erby was challenged to teach a class and communicate her love of history to others in order to complete her graduate degree.

“I loved sharing my love of history, and I got kind of addicted to teaching, and I didn’t want to go back to just researching and writing,” said Erby.

As she searched through the job market, Erby eventually found herself interviewing here at Washburn.

Ultimately, as she interacted with the campus, there were many things that drew Erby to wanting to teach here when the position became open.

“I like that Washburn attracts students from so many different backgrounds,” said Erby. “I also like the other faculty members in this department; they’re all really friendly and vibrant teachers.”

Currently, Erby teaches approximately 150 undergrad students in the subject of early American history.  With introductory classes also a part of her teaching, Erby realized she has many challenges ahead with the varied interest levels in students and their willingness to enjoy history. However, as the new professor emerges deeper into her teaching, there are many things she says she has yet to learn and hopes to develop in her students.

“I hope to improve as a teacher and get students excited about history,” said Erby.

All in all, Erby expressed how difficult graduate school is, but also how rewarding it is as it concludes. Though she also mentioned that “the decision to go to graduate school is not a decision to be made lightly,” Erby believes that students will know if it is right for them when they hit that moment of inspiration. She also expressed how tough the financial repercussions can be, as well as the difficult choice of willingness to move anywhere in order to obtain the desired degree.

“The job market is tough after graduate school,” said Erby. “I’m lucky, because I ended up at a good school in a city that I love to live in; not everyone is that lucky.”

Erby is on the 10 year track in the history department and is hoping to make being a professor at Washburn a life-long career.