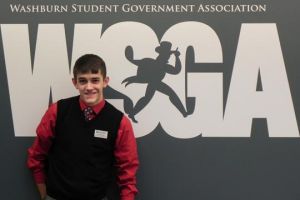 Washburn Review: “Where are you from?”

WR: “What are you studying?”

EB: “I’m studying political science right now, and I will be adding an economics minor.”

WR: “What are your plans after school?”

WR: “What kind of law do you want to study?”

EB: “I don’t know yet. I’m going to wait and take my first year and kind of feel it out.”

WR: “What was your breakfast food of choice this morning?”

EB: “This morning I did not eat breakfast. I had a 9 a.m test this morning, so I was cramming, but yesterday I had Hanover’s [Pancake House] and biscuits and gravy.”

EB: “I think more than anything it’s student life. I think that they do a really good job of getting people involved in the right ways.”

WR: “If you could change one thing about Washburn, what would it be?”

EB: “I would probably have a larger community of students that lived on campus. I lived in the Village and in the dorms, and I think that it really helped me to make friends and get connected.”

WR: “If elected, what are some of your goals?”

EB: “We have three platform goals right now. The first of which is that I’ve heard a lot of complaints about the Internet here in the dorms and in the library. Really it’s an issue all over campus, so we want to talk to ISS and figure out what’s going on and see if we can improve that in some way. Another complaint I have heard a majority of the time I’ve been here is about food service [and] we’ve never really had an administration, president, vice president and an entire staff focus on the issue of food services. Are we really doing what’s best for students and what can be done to figure that out? And finally, the college experience as Amber and I see it in terms of getting students, what they really had in mind about college before they came here. I think looking forward we’ll be giving some of that responsibility over to CAB. To us, it doesn’t really make a lot of sense that WSGA is doing so much programming when we already have a group, who is paid by the university, to be a campus activities board, and once we do that, we focus more on advocating for students.”

WR: “Can you describe your most recent accomplishment?”

EB: “In WSGA, we’ve been working on a couple of different things. Probably my favorite recent accomplishment is the homecoming ball. It was something we had to pull a lot of strings for. Personally, I set a goal for myself last semester to do well academically, and I was able to achieve that. So I’m very proud of that, as well.”

WR: “What other activities are you involved in on campus?”

EB: “When I first came to Washburn, I kind of looked for any outlet that I could. I joined Kappa Sigma fraternity my first semester here. I currently serve as the president of that organization. I’m pretty involved in Bod Squad. I’m one of the ones who paints up and is at all of the games. I just applied for Mortar Board, and WSGA has been a big focus of mine. It takes 30 hours a week sometimes. That and school really keep me busy. I am also in political science club, and I debated for Washburn for two years.”

WR: “Who is your biggest role model?”

EB: “I think there was one student, in terms of WSGA, last year who kind of acted as a mentor to me. His name is Lucas Mullin. He was vice president last year, and as soon as I got to Washburn, he was ready to help me, ready to get me involved, and I think that in terms of student life, he’s my biggest mentor just because he was always willing to give someone a chance and always willing to make sure they had the best experience possible, and that’s really where this campaign came from; Making sure that students have the opportunities to get involved.”

EB: “I’ve been on a “How I Met Your Mother” kick, and I know everyone’s going to call me a fair weather fan for that just because it’s kind of an older show, but I’ve been watching that on Netflix, and before that, I was watching “Greek.'”

EB: “My friend’s will tell you that when I’m stressed out, I like to cook Italian food and do P90X.”

EB: “A lot of people think that the WSGA people don’t have lives outside of school, but I absolutely love going out and hanging out with people on the weekends. Besides that, watch Youtube videos and do homework.”

WR: “Do you volunteer anywhere?”

EB: “Yeah, we’re doing ‘Can Emporia’ now so once that’s over, we’ll volunteer and take all of the cans and distribute them. Kappa Sigma has kept me really grounded in terms of community service. They just finished doing Habitat For Humanity. Back home, my church is really involved in something called The Lord’s Dinner, which is essentially a soup kitchen.”

WR: “What’s your philosophy for being a successful person?”

EB: “I think Spiderman. I have a little brother. Growing up, Spiderman was his thing and we bought one, two, and three and watched them all together. He would jump around the house and stick out his hands. So I really like Spiderman, and I think the story of Peter Parker is more interesting than Clark Kent’s.”

EB: “I like to go to the Burger Stand on Fridays. They have karaoke, so it’s always fun to watch people demonstrate how they can’t sing. Flying Monkey in College Hill. There is Blackbird on Gage. I really like too.”

WR: “How do you find time for everything and live a balanced life?”

EB: “It’s been a struggle. It’s not been easy. I was joking with my roommates that this semester I would probably be going to bed at 9:00, and waking up at 7:30 every morning. Obviously, I still find time to go out. So it’s all just about time management and prioritizing things and making sacrifices for things you really want. If you really want to serve Washburn’s students, that sometimes means you have to give other things up. For instance this weekend was a really tough choice for me. My parent’s 25th anniversary  was on Valentine’s Day, but also this weekend there is an awesome game that I’m sad I wont get to go to, and there is All Night at the Rec which I really enjoyed last year, but I’m going to go home and cook for my parents because I think it’s important that we don’t lose track of that. As much as I want to spend forever here, and in college, I’ll graduate, and after that there’s another life, and you have to make sure you didn’t loose track of that.”