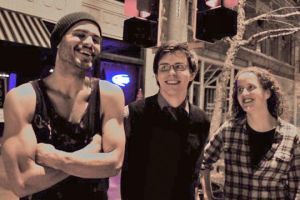 The band was born via the influences like The Beatles, Elvis Costello, U2, The Ramones, The Cars and rock n’ roll pioneers Chuck Berry, Buddy Holly and Little Richard.

“We’re a mixture of things, but it’s all rooted in older stuff,” said Aytes.

It’s a stylistic combo that seems to be catching the ear of many in and around the Topeka area, where Chris Aytes & The Good Ambition have been building a following since relocating in 2009.

Anyone who has caught this band live is fully aware of their upbeat and energetic performance and undeniable onstage chemistry, which could easily be accredited to the fact that the band’s drummer also happens to be Aytes’ wife, Renelle Aytes. High school romance led to wedding bells in college, where the two studied music together.

Always known as the “girl drummer,” Aytes quickly found the means necessary to hang with the boys after being exposed to legendary drummers, such as Keith Moon (The Who) and Max Weinberg (Bruce Springsteen & The E-Street Band.) A healthy dose of encouragement and confidence from her husband and band leader didn’t hurt either.

The story of Chris Aytes & The Good Ambition began in 2006 in Aytes’ hometown of Great Bend, Kan. It wasn’t long after that the couple uprooted themselves and began to lay the groundwork for what would become their 2010 self-released debut album, “The Movement.” Work on the album began when the Aytes’ were living in Indiana and gigging around with various different lineups. Soon, the head of St. Louis-based Twelve Bar Productions, took a personal interest in the band and offered to bring them into his studio and produce their recording himself.

This was just the first of many steps in a long journey that eventually led Aytes and Renelle to Topeka, where they hooked up with bassist Josh Hartranft, who became what Aytes considers “the piece of the puzzle that’s been missing since we started Chris Aytes & The Good Ambition.”

It was when Hartranft entered the fold that Aytes’ vision for the band started to come to fruition.

“He’s added a lot to the energy of the band,” said Aytes. “For awhile, I always felt that we would be called Chris Aytes & The Good Ambition, regardless of who was in the band and that this was sort of my John Lennon and The Plastic Ono Band concept. Now that he’s in the band, I really feel like this is what Chris Aytes & The Good Ambition is supposed to be, and if he left, I would probably change the name. That’s how vital he is to the process right now.”

The motives behind what Chris Aytes & The Good Ambition are doing with their music are simple and personify the very essence of what rock n’ roll has always been: to get up on stage and have a good time.

“Ultimately, we want to have fun with rock n’ roll, which doesn’t happen much anymore,” said Aytes. “There are a lot of rock bands that are very serious and brooding and angry and full of angst and rage. We just want to get up there and do “Roll Over Beethoven” and have fun. We want to help you forget about your problems and worries and even find some encouragement. If you’re going to pay attention to the lyrics, maybe you’ll be encouraged or uplifted in some way. Otherwise, we’re just a toe-tappin’ good time.”

For those who want to explore the band’s message a little deeper, Aytes elaborated on it.

“Our songs are mostly just exhortations on encouragement, life and how to live it,” said Aytes. “We want to give people hope and have them realize that, whatever their problem is, it’s not the end of the world. We just try to be a positive thing. I want to write the kind of music that, if you’re having a horrible day or a rough time in life, you can listen to us and we’ll help encourage you through it, rather than music that helps you brood and allows you to be a party to misery. That’s healthy and necessary sometimes, to listen to something that’s down and helps you grovel for awhile. When you’re ready for the uplift, we want to be the band that does that.”

Those interested in experiencing Chris Aytes & The Good Ambition are encouraged to go see the band live at the winter installment of LOUDsoftLOUD, a showcasing of local bands and singer/songwriters that is set to take place on Friday, Feb. 17th in the basement of The Kansan Grill at 705 S Kansas Ave.

Showtime is 8 p.m. and the cover is only $5 with a discount offered to students.

Additionally, the band has plans in place to record and release an EP of new material later this year. For more on Chris Aytes & The Good Ambition, visit them at www.Facebook.com/TheGoodAmbition.