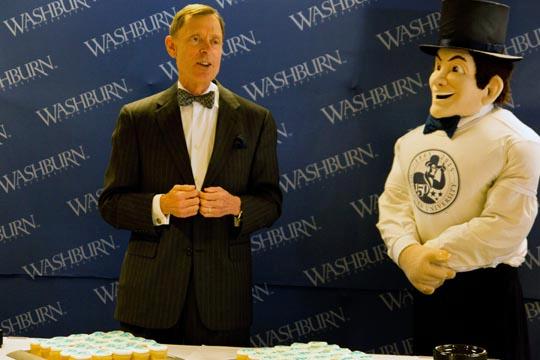 Founders Day President of Washburn University, Jerry Farley speaks to a crowd about the history of Washburn before passing out cupcakes along with the Ichabod.

Washburn University was established February 6, 1865 as Lincoln College by a charter issued by the State of Kansas and the General Association of Congregational Ministers and Churches of Kansas. A two-story brick building on the northeast corner of 10th and Jackson Streets was soon erected and the first classes began in January 1866. In 1868, the school was renamed Washburn College, in recognition of a $25,000 donation by Ichabod Washburn, a church deacon and resident of Worcester, Mass.

Washburn was granted a permanent location in 1865 when Topekan Col. John Ritchie donated a 160-acre site, which at the time was a considerable distance southwest of the city. Construction on the first building began in 1872, with occupancy taking place in 1874. For the next two decades, college President Peter McVicar conducted an aggressive development campaign. His efforts resulted in the establishment of numerous Victorian limestone structures that characterized the campus for the next 90 years.

Expansion of the school was constant. The School of Law was organized in 1903, as was a School of Fine Arts and a medical school, which educated physicians until 1913. During the next three decades structures such as the Mulvane Art Museum, Benton Hall and Whiting Field House were added to the campus. In 1966, a tornado struck Topeka and several original and historic buildings on campus were demolished, as were more than 600 massive trees that had shaded the campus. The Washburn community rallied and financial support from friends and alumni made possible the rebuilding of many school facilities during the coming years. Today, university facilities offer more than one million square feet of modern academic and support space.

In 1941, the citizens of Topeka endorsed Washburn by voting to establish a municipal university, supported in part by the city and governed by a local board of regents. In 1952, the Washburn Board of Regents officially changed the name of the school to Washburn University of Topeka. In 1999, the university’s primary funding was moved from city property tax to county sales tax sources, with the school retaining status as a municipal subdivision of the state. In addition to local financial support, Washburn has received state funds since 1961, which have been coordinated by the Kansas Board of Regents since 1991. The university is governed by its own nine-member Board of Regents.

Washburn provides broadly-based liberal arts and professional education through more than 200 certificate, associate, baccalaureate, master’s and juris doctor programs through the College of Arts and Sciences and the Schools of Law, Business, Nursing and Applied Studies.

Richard Norton Smith, a nationally recognized authority on the American presidency and a familiar face to viewers of C-SPAN, as well as “The NewsHour with Jim Lehrer,” will be the inaugural speaker of a new Lincoln Lecture Series with the presentation of “Lincoln and Washburn University: Toward a New America,” at 7 p.m. Monday, Feb. 6 in the Washburn Room, Memorial Union, Washburn University. The lecture is free and open to the public. A book signing will take place after the lecture.

The Lincoln Lecture Series was instituted in conjunction with a series of events leading up to Washburn University’s sesquicentennial celebration in 2015. Washburn was established as Lincoln College by a charter issued by the State of Kansas and the General Association of Congregational Ministers and Churches of Kansas on Feb. 6, 1865.

Smith has served as director of the Herbert Hoover Presidential Library and Museum in West Branch, Iowa; the Dwight D. Eisenhower Center in Abilene, Kan.; the Ronald Reagan Presidential Library, the Ronald Reagan Presidential Foundation and the Reagan Center for Public Affairs in Simi Valley, Calif.; the Gerald R. Ford Museum and Library in Grand Rapids and Ann Arbor, Mich., respectively; and the Robert J. Dole Institute of Politics at the University of Kansas in Lawrence.

Smith has published numerous books, including “An Uncommon Man:  The Triumph of Herbert Hoover” (1984); “The Harvard Century:  The Making of a University to a Nation” (1986) and “Patriarch:  George Washington and the New American Nation” (1993). His book, “Thomas E. Dewey and His Times,” was a finalist for the 1983 Pulitzer Prize.