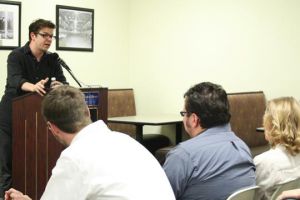 Drugs, terrorism and poetry all converged at Washburn University’s Mabee Library Monday night as Ben Lerner read from his new novel “Leaving the Atocha Station” from Coffee House Press and sponsored by Washburn’s English and history departments as well as the Center for Kansas Studies.

After departing his native Topeka, Lerner studied and lived in Providence, R.I., Pittsburgh, Penn. and the writer’s new home of Brooklyn, NY. Nonetheless, it was Lerner’s time in Madrid, Spain on a Fulbright Scholarship during the bombings of the Atocha Train Station that helped shape the novel, but separates from reality in other areas.

“It’s a fiction, like a landscape of my memory of the rhythm of life there is borrowed from experience,” said Lerner. “Since the book is also set in the time of terrorist attacks at the Atocha Station and the political aftermath, it does rely on my memory of those events.”

In addition to “Leaving the Atocha Station,” Lerner has also penned three well-received poetry books and at 24 was the youngest writer published by Copper Canyon Press. While his novel has also received much attention from the likes of The New Yorker and celebrated author Jonathan Franzen, Lerner still hesitantly considers himself a poet at heart.

“I’ve written more poems, and I’ve been more than apprenticed to poetry than prose in a certain way,” said Lerner. “Really, I think of it as one variegated practice. You write what’s given to you to write. I don’t get to decide I’m going to write a novel or I’m going to write poems. It’s more about what feels possible in the act of composition.”

While Lerner appreciates all the attention his novel has collected, he still wonders whether not he will ever feel accomplished as a writer, citing how success is not always based skill, talent or ability.

“It’s really flattering when someone invests a lot of attention in something you’ve written,”

said Lerner. “I do think there’s a huge element of luck. I think great books get totally ignored, and bad books get really celebrated. It’s not like a meritocracy.”

Despite Topeka not seeming like a stimulating hub of creativity, Lerner acknowledges the many writers and teachers who helped foster his capacity for inventiveness with words, even citing Eric McHenry, Washburn assistant English professor.

“The primary thing I associate with Topeka is this company of writers that was available to me,” said Lerner.

The Topeka and Washburn writing community filled the Mabee’s iRead Lounge for the reading, calling for extra seats to accommodate all patrons for the favored reading.

Having been a fan of Lerner’s poetry, Elise Barnett, junior English major, was certainly enthused to attend the event.

“Even though he’s reading from his new novel, it’s always great to come and see poets when they come to Washburn so they can know are welcome and supported,” said Barnett.

Barnett felt the reading was a learning experience for her as an aspiring poet and plans to dive right into her recently purchased copy of “Leaving the Atocha Station.”

“He speaks really eloquently and intelligently,” said Barnett. “You can tell he has a true understanding of the craft of poetry and the craft of writing just by his detailed descriptions of how the mind works.”