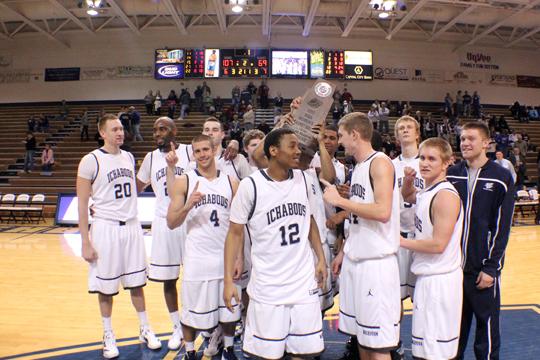 With a men’s team devoid of senior leadership, perhaps this past week was a puzzling experience.

First would come a senior night on the road followed by a final regular season home contest that was just another game.

Going into the 198th matchup of the “Turnpike Tussle,” Washburn was looking to keep their conference crown hopes alive. In contrast, Emporia State University was simply trying to keep their postseason existence alive for one more week.

Having torn apart the Hornets at home, the Ichabods were looking to complete a season sweep. ESU wouldn’t just lie down for WU, however.

Opening the game with a three point shot, the Hornets took their first and only lead of the night, 3-0. Despite taking back the lead on a 7-0 run, the Ichabods were never quite able to put ESU away in the first half.

Led by junior guard Will McNeill and sophomore guard Jeff Reid, who finished with 28 and 15 points respectively, Washburn would open up a lead that grew in the opening half to as large as 14 when the two teams headed into the locker room.

The lead built in the opening stanza came on the back of the defensive efforts of Washburn, as the boys in blue were able to hold the home squad to just 24 percent shooting from the floor while also limiting the Hornets to a paltry 15.4 percent from beyond the three point line as well.

In contrast the Ichabods shot a respectable 46 percent from the floor, dominating the game on the boards as well. In particular the duo of McNeill and Reid mirrored each other finishing the half with 8 points and 4 rebounds each.

After coming out of the dressing room, the two teams would continue to fire away from outside. Emporia State managed to light up the nets in particular from beyond the arc, shooting 62.5 percent. With a barrage of outside theatrics, ESU was able to close the lead to single digits. The efforts wouldn’t be enough as Washburn never allowed the lead to shrink to less than 6 points.

When the clock drained to zero, Washburn found itself the owner of a 68-60 victory.

After the game Washburn’s head coach summed up his team’s efforts.

“We didn’t play especially well offensively,” said Bob Chipman. “We were strong defensively and that was enough for us.”

With the first hurdle cleared toward a share of the regular season conference title, Washburn turned its attention to Lincoln University. The Blue Tigers, having bitten by the injury bug throughout the season, came into the game with just nine players on the trip to Topeka.

Outmanned and outgunned, the Ichabods, playing with something at stake, showed no pity.

In particular the first half featured a myriad of standout performances as the team played unselfish basketball from tipoff to buzzer. With five players scoring 5 or more points in the opening frame, the Ichabods more than doubled up the Blue Tigers in scoring, rebounding, assists and shots made.

Sophomore guard Jared Henry, usually a spark off the bench, was a full fledged explosion in his own right, scoring 10 points in the first half and finishing the game with 18 points including shooting 7-8 from three point range.

“It was a lot of fun,” said Henry. “We were just happy to get this one for the fans and get a piece of that title.”

In the second half the Ichabods would continue to put on a clinic on how to win as a team. Having racked up 12 assists in the first half, the sharing continued as the team put together 16 more assists. Junior guard Martin Mitchell served as the primary conduit of distribution, tallying 8 assists by the end of the game. The flow of the game reflected on the character of the team.

“I just feel so blessed,” said Bob Chipman. “They work hard every day. They don’t take a day off.”

Washburn finished off the Blue Tigers in emphatic terms, winning 107-69.

Moving forward, Washburn due to tiebreakers will assume the role of No. 1 seed in the MIAA tournament. The Ichabods will be facing off against the most familiar foe in the conference, as the 199th edition of the “Turnpike Tussle” will take place noon on March 2 at Kansas City Municipal Auditorium in the opening round.