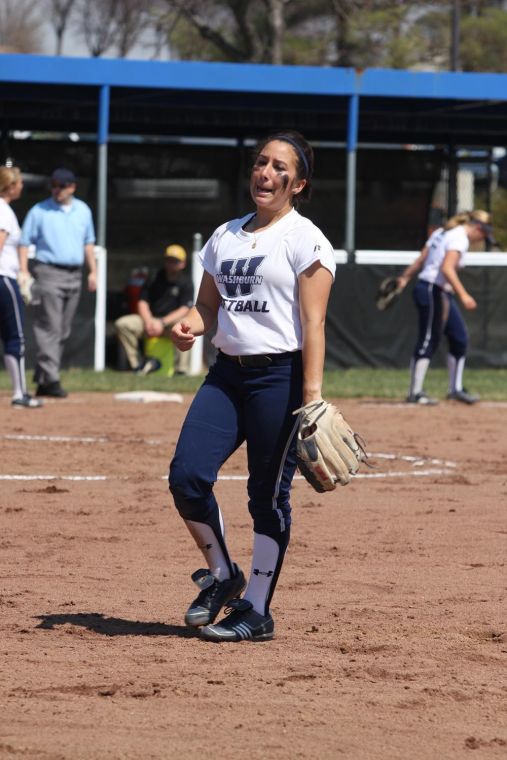 Mother Dearest Senior pitcher Lindsey Moore communicates with her teammates last Spring. Moore, who considers herself the “team mom,” for the Lady Blues will take over the role of pitching staff ace this season.

First impressions are key, especially when evaluating a player. New Washburn head softball coach Vanessa Becerra met one of her new players in a peculiar way.

“When I first met Lindsey Moore she was nannying,” said Becerra. “She was a total mom.”

The “mom” label didn’t stop there.

“It’s been a joke that I’m the team mom and I’m okay with that,” said Moore, a senior pitcher.

The 5-foot-7 right-hander from Edmond, Okla., earned MIAA Honorable Mention last season. As a senior, her maternal instincts will be put to the test. With a new coach and a new system, Becerra said it is imperative that the Lady Blues come together as a team.

“I have a totally different coaching philosophy than what they’re used to, but I think they’ve caught on,” said Becerra.

After starting much of her career, perhaps it is no surprise Moore has become one of the go-to players for the Blues.

“If I need something done, she is the first person I call,” said Becerra.

Moore cherishes the chance to be one of the team leaders.

“I want to do whatever I can to lead this team on the right path,” said Moore.

What makes Moore a better leader is her team-first attitude. The iron woman of the Lady Blues knows when she needs to step up, but also knows she doesn’t always have to be the leader just because of her age.

“I believe you can be a leader at any age,” said Moore.

“Everybody on our team is a leader,” said Becerra.

Moore, a competitive utility player who started the first 100 games of her career, will let nothing stand in her way—not even a torn labrum in her non-throwing arm.

During the beginning of her sophomore season, Moore dislocated her left shoulder during a workout. She simply popped it back into place and continued to play on. Moore was still able to bat .258 with 39 hits and 20 RBIs. She even notched five home runs and eight doubles despite her shoulder dislocating almost every at bat. After starting all 50 games at shortstop for the Blues her sophomore season, Moore had surgery to repair her shoulder.

During the fall of 2010-2011 season Moore was not allowed to participate in any drills. She was not even allowed to touch a bat or softball. After being cleared before the spring semester she had much work to do to get back to 100 percent. During her junior year Moore started 34 games and played 38 games. She even pitched in six games striking out ten. Although she led the team in batting average at .305 she did not really hit her groove until conference play. After getting back in the swing of things Moore smacked in 10 runs on twenty hits while batting a team best .385 during MIAA play. Despite playing less games Moore was still able to garnish MIAA Honorable Mention Honors.

Now fully healthy Moore and Becerra both have high expectations for the season.

“I have some pretty high expectations for her because I know she expects it from herself,” said Becerra. “She’ll push herself to be nothing but the best.”

The former infielder will be looked upon to contribute even more this season. After practicing short stop, third base and outfield during the offseason Moore may have just found where she belongs. In the pitching circle.

“She will be our go to pitcher as of now. She earned the number one spot by being consistent and hitting her spots,” says Becerra.

After making brief pitching appearances for the Blues during her career the move is nothing dramatic. Moore has pitched competitively since her high school days so the circle is not terrifying for the senior.

“It will be something new but it will be fun. The ball game will be more in my control,” says Moore.

Moore’s control in the circle compares nothing to what she does in the classroom. The daughter of Jenny and Chris Moore is in her final year of majoring in early childhood education.

“It’s really time consuming but I don’t now any other way. I don’t get done till seven then it’s time for homework,” says Moore.

The Blues star has become a model for how it is to be a student athlete. Moore has been selected to the MIAA Academic Honor Roll all three years she has been at Washburn. After getting her teaching license in kindergarten through sixth grade and an emphasis in math for 6ith through eighth grade, Moore plans on becoming a teacher and even maybe one day becoming a coach.

“Someday I want to do what I’ve always done and that is softball,” says Moore.

But for now coaching and teaching is in the back of her mind. Nothing means more right now than a solid season for the senior.

“I want to do well in conference and get to regionals. For four years we haven’t been to regionals. That’s my biggest goal. To get there,” says Moore.

Look for Moore somewhere on the field this season as the Lady Blues kick off their season in Durant, Okla., for the Southeastern Oklahoma State Tournament on Feb. 17.