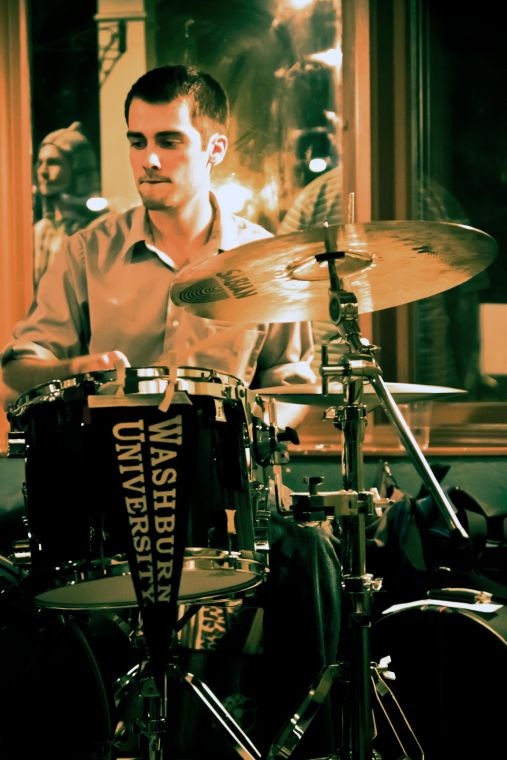 Despite a blustery cold night, Washburn students came to warm up with a band that has become a popular campus band.

With a sound that is reminiscent of old school funk performers like Stevie Wonder and covering artists such as Neil Diamond, Echo Lake shook the house at Blackbird Espresso Bar and Bistro Saturday night.

With temperatures dipping into the single digits when accounting for wind chill, anyone passing by the Blackbird could glance in to a packed house that was quite literally wall-to-wall. The all-ages show attracted a variety of concertgoers who ranged from 15 to 55 years old. The majority of listeners however, were Washburn students who have known the band for a while.

“We appreciate everyone that came out tonight,” said Mike Spangler, guitarist. “It’s been a while and we wanted to put on a good show for everyone.”

The band, which had been a staple of the local music scene the last couple of years, had been on a hiatus of sorts.

“We had a few of us who were working senior capstone projects this last semester so we took a break,” said Spangler. “We’re looking forward to getting back into playing and working our music.”

“I like that they put it on somewhere I can get into,” said Brian Hall, 15 year old Topeka resident. “I think they are awesome, and everyone should check them out on Myspace.”

Toward the end of the evening, the crowd continued to dance the night away as the Blackbird went past their normal operating hours. The live music was a welcome break from the monotony that has some people looking forward to the warmer months on the horizon. Echo Lake will be looking to continue their musical pursuits going forward. Topekans are looking forward to what they’ll be hearing soon.

“I think they are a breath of fresh air for music in Topeka,” said John Bills, Topeka resident. “This is the kind of thing that everyone in this town should want to show up for.”