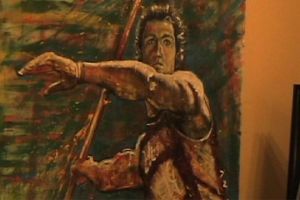 A great way to start out your weekend on the First Friday of every month is to visit some of the 40 venues around Topeka participating in the First Friday Art Walk.  Most galleries will be open froSome galleries are located in restaurants, bars and coffee shops, and some feature free live music, food and drinks, along with your art gazing experience.

In the new NOTO art district in North Topeka there are eight galleries alone that feature live bands.  Most of the NOTO galleries are located on Kansas Avenue and the few that aren’t are right around the corner.

Rene Johnson, sculptor and artist of SS Design Concepts, is also the owner of the Eclective Gallery in NOTO.  The Eclective will have the band “Monk’s Wine” from 5:30 p.m. to 8:30 p.m. and there will be free wine, appetizers and soft drinks.

The Serendipity Gallery is a NOTO gallery that will be having their grand opening on the upcoming First Friday, serving free wine and beverages, with the live band “Mike Babb and S’more Blues” playing until midnight.  They will be having a sit-down dinner, catered by Johnny Carino’s for a $10 charge that includes a full meal and a soft drink.  There will also be a full bar.

The Flying Monkey located at 1635 SW Washburn will feature new artist Greg Fitch.  They will be serving free tapas and the “Vinyl Ambassador” will be there spinning music from 5 p.m. until 8 p.m.

Barbara Waterman Peters is a local artist who graduated from Washburn University.  She belongs to the group of artists who started the First Friday Art Walk 25 years ago.

“We were the only ones in town,” said Peters.

Many of her works will be exhibited at the Collective Art Gallery located at 3121  SW Huntoon, a location on the corner of Oakley and Huntoon that feature other galleries, such as Beauchamp’s Frameshop and Gallery, SOHO interiors and Glass Expressions Gallery,  where Kymm Hughes, Washburn teacher, displays some of her artwork.

“The Collective Gallery is a cooperative [that] opened in 1987, and I was one of the founding members,” said Peters.  “Originally, there were a dozen or so artists.  The core group was all women, and we all had connections with Washburn University.”

Peters will have more of her paintings showing at Studio 831, a gallery she shares with other artists in the NOTO district.  The exceptionally busy artist also has work hanging in several other venues, including the Mulvane Art Museum and the lobby of the Andrew and Georgia Neese Gray Theater on Washburn’s campus.  Her art is on the publicity posters and the playbill of the current play at the theater “The Year of Magical Thinking,” which she also designed the set for and collaborated with others to create.

“There’s definitely something about the art department at Washburn,” Peters said.  “However, the secret is that we have faculty who are each very interested in student success.   There is maybe some kind of magical formula here, and the environment tends to send positive people out.  The faculty we had here were so encouraging, and we took that energy, enthusiasm and knowledge and went ‘ignorantly’ into forming a gallery.  If we had known how much work it was going to be, we might have had second thoughts.  Thank God we are still in existence 25 years later.”

Peters believes the art walk is for the Topeka community and.

“I think it’s a good opportunity to get out and see friends and make new friends,” said Peters. “It’s a shared experience.  It’s a bond.  It’s one of the things helping to give Topeka a more positive attitude about itself.  This is something that everyone can come to.  There’s no admission charged and it’s open to the public.”