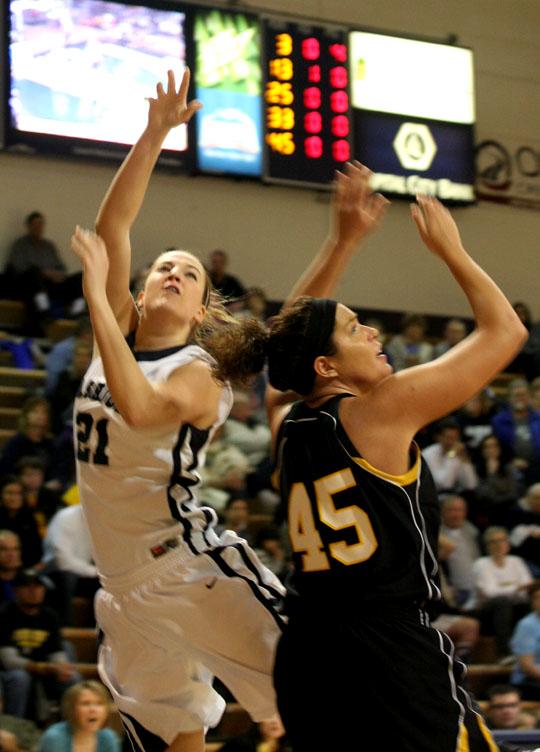 Senior center Cassie Lombardino turns for two of her 12 points.

Facing off against a team which the Lady Blues took down on Pearl Harbor Day, Washburn put the hurt on Fort Hays State University Saturday in Topeka.

Early on in the game, the Lady Tigers looked to execute a game plan designed to take the outside game of Washburn senior guards Ebonie Williams and Stevi Schultz away. Giving away the post to the Lady Blues turned out to be FHSU’s undoing.

“They were pressuring on the perimeter and the wing so we wanted to get it inside,” said head coach Ron McHenry. “She was our pressure-release valve in the first half, getting us some space on the perimeter.”

While Lombardino battled underneath the goal, the steady hand of junior guard Laura Kinderknecht guided the Lady Blues. With timely shooting from outside, Kinderknecht went 2-for-4 from three point range, and led outside shooters with six points. The speedy guard also helped to keep the team flowing in their offensive sets, contributing three assists in the first half. Kinderknecht finished the game with 11 points and six assists, with just one turnover. Saturday’s contest was the seventh start in a row for the St. Marys, Kan., product.

“We had [senior guard] Megan Lassley go down with an injury earlier in the season,” said McHenry. “She stepped in and has really earned her minutes. She never seems to be tired so I can’t really justify not getting her in there as much as possible.”

While other players stepped up in the first half, team leading scorer Williams was silent in the opening period. This changed in the second half, as Williams exploded for 13 points and the Lady Blues turned to the perimeter to strengthen their lead.

“It was tough watching her sitting on the bench in the first half,” said McHenry. “She seemed like she was making up for it though in the second, when she really found her shot.”

As Williams and company continued to pound away from the outside, Washburn’s front line also went to work on the boards. Junior forwards Sierra Moeller and Tiara George each also chipped in six rebounds a piece. The work on the defensive boards helped to minimize the offensive chances for the Lady Tigers.

Shooting a red-hot 62 percent from the floor in the final period, Washburn pulled away as time expired. When the final buzzer sounded, the Lady Blues walked away from the game with a 75-55 win.

Washburn now turns its attention to the University of Central Missouri Jennies Feb. 18 at 1 p.m. in the MIAA Game of the Week. WU last locked horns with UCM on New Year’s Eve, when the Lady Blues took a hard fought win in Warrensburg, Mo., 74-66.

Led by senior forward Nicole Caddell, UCM will attempt to make up ground and position themselves for a top-three seeding in the conference postseason tournament. Caddell currently paces the Jennies with 15.8 points while pulling down 7.4 rebounds per game, placing her in the top six in the MIAA in both categories.

UCM has won eight of its last nine games, the last loss came against current conference leader Pittsburg State University on Jan. 28. No. 9 Washburn will defend their second place position in the MIAA conference standings 5:30 p.m. Feb. 8 in Lee Arena.