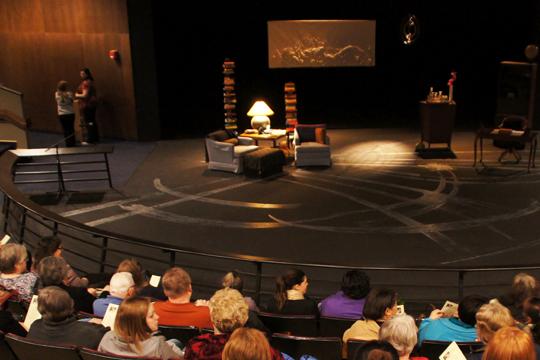 Magical Year Joan Didion’s “The Year of Magical Thinking” chronicles the author’s life after her husband’s death and her daughter’s illness.

Grief. Sorrow. Pain. Avoidance.  All of these words and more are an attempt to describe the play I witnessed this weekend.     I say “attempt” because it simply doesn’t cover it.

“The details will be different, but it will happen to you,” said Joan Didion, or rather Barbara Dingman, associate professor of the Washburn University theater department. “That’s what I’m here to tell you.”

Dingman portrayed Didion’s character at WU’s theater production last weekend of “The Year of Magical Thinking.” The play is an adaptation of the best selling memoir by Didion, chronicling her thoughts after the sudden and shocking death of her husband and the struggles afterward with her daughter’s health, as well.

“Dr. Paul Prece suggested it,” said Dingman. “I read it, and I was flattered. I was challenged, and I said ‘yes’ because I trusted him.”

Throughout the plays entirety, about 95 minutes, you are a witness to Dingman’s character and her thoughts alone.  No other actors and actresses were needed for a play like this to work, which is something intriguing in itself.

Throughout the struggles  Didion’s character endures, she tries her best to understand what has happened, do everything she can to avoid dealing with it and yet somehow make peace with it.

“It’s beautiful. It’s important, but it‘s not light-hearted by any stretch,” said Dingman. “It’s complicated. It’s raw. It’s ‘what you see is what you get.'”

Although it is a dark natured play, the snippets of humor were carefully crafted to lighten the mood.  Upon being brought into a room with a doctor and social worker, Didion asks, “My husband’s dead, isn’t he?” To which, a social worker calls Didion a “cool customer,” in regards to telling her the news.

Dingman’s nearly flawless delivery of the lines are what drive the compelling story.  It was like listening in on someone’s thoughts that were crazy enough to be brutally honest,  yet almost unreal.

With the heavy subject matter were hopes of a heavy reward.    All proceeds from the weekend shows were to be put towards theater scholarships.

Overall, I think that the play had a purpose and deep meaning.  It may not have been for the light hearted, but it was something real and as honest as you can get.  It was truly a one woman show unlike any other.  After all, as it’s stated in the play, “grief turns out to be a place none of us know until we reach it.”