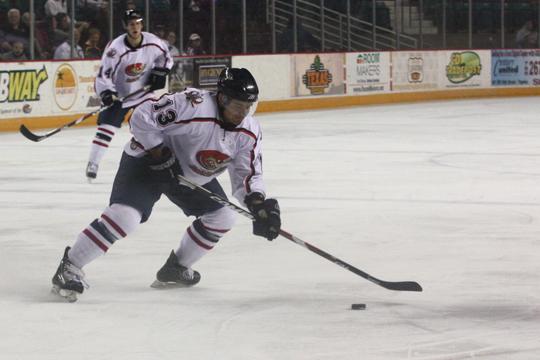 The Topeka RoadRunners were able to split their series this past weekend with the Springfield Jr. Blues.

Forward Ryan White had another strong effort for Topeka in Friday’s contest, scoring a powerplay goal at 9:10 of the second period to tie the game at one. Defenseman Kevin Patterson scored his third goal of the season at 16:25 to give the RoadRunners the lead, but it was all they could muster. Topeka finished the game with a 34-21 shot advantage. In the loss, goaltender Peter Traber stopped 16 of the 20 shots he faced, with Springfield’s fifth goal coming when the net was empty late in the game. Goaltender Gabe Antoni stopped 32 of 34 shots in the victory.

Saturday proved to be the more successful game for Topeka. Behind a strong second period, Topeka defeated Springfield 5-1 in a game in which they lead throughout.

The RoadRunners scored early when forward Dan Dupell scored at 1:20 of the first period. Antoni turned aside the other 11 shots he faced in the opening period.

In the final period, forward Sean Gaffney scored at 8:46 to make it 5-0. At 16:33, Springfield forward Josef Pontasch scored an unassisted goal, but it was too late for the Jr. Blues. Traber stonewalled Springfield for much of the contest, stopping 29 of 30 shots. Antoni made 34 saves on 39 shots in the loss.

The RoadRunners continue their six-game roadtrip this weekend, as they travel to Fairbanks, Alaska to take on the Fairbanks Ice Dogs. Fairbanks forwards Gabe Levin and JT Osborn lead the North American Hockey League with 71 points and 67 points respectively. Faceoff is at 9:30 p.m.