Serendipity a blessing for NOTO 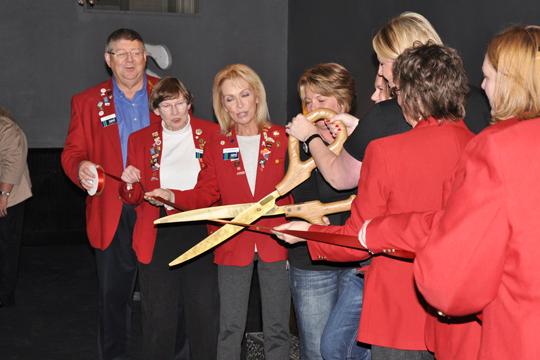 Exciting new things are happening in North Topeka’s Art District, and the future looks bright. Not only did Serendipity have its ribbon cutting last weekend as the newest addition to the fairly new arts district, but also some important information was shared about the future of NOTO.

During the February First Friday Artwalk at the NOTO Community Arts Building, John Hunter, Washburn professor and co-chair of the NOTO arts district project, announced that an anonymous foundation from New York City decided to donate $50,000 in 2012 to go to the further development of NOTO.

“We were contacted because of our website, by a foundation from New York City, they found NOTO,” said Hunter. “Through a series of steps back in May they sent a team here [and] they met with city leaders to see what they were doing at the time.”

The anonymous foundation will continue to give $50,000 a year for the next two years if in 2013 NOTO can raise its own $25,000 and again in 2014 if NOTO can raise its own $50,000 in that year. The first donation has already been incorporated into the 2012 budget, which will help in their development of their Saturday market. The new goal of NOTO leaders is to raise the $25,000 needed to obtain the additional funding by getting as many local artists and vendors to open shop in NOTO, and the NOTO Saturday Market, opening April 7, will hopefully help do just that.

“[The goal is to] help artists renovate the places, market the area on a national basis,” said Hunter. “[To] really promote something that is highly successful right here in Topeka, Kansas, our NOTO arts district.”

Serendipity, being the newest addition to NOTO, has much to offer to Topeka as well as the First Friday Art Walk.  It is a new event venue which will be participating in every First Friday, and can be booked throughout the month for business meetings, parties, weddings, or any event.  There is a full bar, big screen televisions and room to bring in caterers.

“We have committed to every First Friday Artwalk, and plan to have live music every first Friday,” said Patty Torrence, co-owner of Serendipity.

In addition to adding even more venues to the First Friday Artwalk, NOTO plans on attracting more vendors and artists to participate in their NOTO Saturday Market. Their goal is to compliment the downtown farmer’s market by focusing on arts, crafts and activities as well as representing our rich cultural diversity one can find in Topeka by attracting certain food vendors. They hope the people leaving the farmer’s market will continue their day by heading to NOTO.

“We want there to be booths to sell food while people are looking at art and listening to live music,” said Anita Wolgast, co-chair of the NOTO Arts district project. “We are looking to do an art-type district focusing on arts, and crafts….as well as have food that reflects that rich cultural diversity; [such as] Native American Indian tacos, German bierocks and Italian sausage.”

Because the NOTO Saturday Market is brand new, they are looking for a new logo, and are hosting a logo contest. The entry deadline is Feb. 27, and to find more information about requirements and entering, visit www.notoartsdistrict.com. The winning entry will be on display during April’s First Friday Artwalk at the NOTO Community Arts Center located at 922 N. Kansas Ave., and a $500 honorarium will be given to the winning artist.