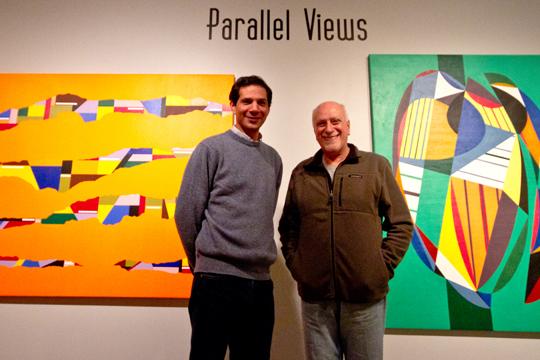 On Feb. 3, Mulvane announced the opening of these exhibits in an opening reception where Cindi Morrison, museum director, as well as guest artists Fernando Pezzino, who is also a Washburn professor, and Miguel Angel Ginvanetti spoke about their contribution.

“We could not have done the exhibition catalogues or fly Miguel down from Argentina without the tremendous support we were offered,” said Morrison.

Ginvanetti has been a life-long mentor of Pezzino and taught him while in Argentina. Now, these two get to display their artwork side-by-side in the exhibit “Parallel Views.”

Pezzino is an instructor in the department of modern languages at Washburn and has been teaching Spanish since 2008. Originally, he received his bachelors degree in theatre from the Universidad Nacional de Tucuman and then later his masters in arts in Spanish literature from Arizona State University. He has a hobby that extends well beyond the classroom though: acrylic painting.

“[As a student,] he was always interested in things around him,” said Ginvanetti.

In the exhibit of “Cultural Fragments,” one portion of “Parallel Views,” Pezzino offers his viewers a unique perspective to culture as each of his paintings offer clues to interpret and understand the culture in which they are seeing represented on canvas.

“Language and art are what I do,” said Pezzino. “I think being able to take the cultures and languages of other countries and put them into my art gives a different approach to what I teach; being a teacher here and art have balanced each other.”

One of the many things a viewer notices about Pezzino’s painting is the bold and eye-catching color and use of geometric shapes. Even more, the viewer is asked to play a game as they uncover clues scattered throughout the works and match them up with their numbered puzzled parts.

“I give them an invitation to play with the crosswords,” said Pezzino. “I hope this allows them to personally discover the cultural differences among countries that speak the same language.”

Pezzino has also exhibited his work in the Miami International Art Fair that took place in late 2011.

The exhibit in Mulvane Art Museum will be open to students, as well as the public, until March 18.