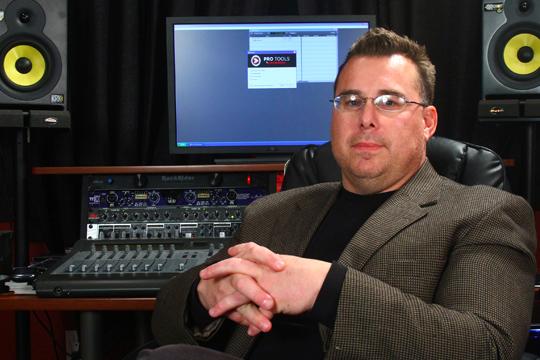 Musically On Fire Paul Schneider is the owner and operator of Rundown Recording Studios, a music recording company based in Topeka. Schneider also serves as a firefighter in Lawrence, Kan. when not working with local musical talent from Northeast Kansas.

In the article, Schneider spoke about changing the culture of the recording industry in Topeka so it would get a favorable reputation like other cities, such as Nashville and Los Angeles.

Schneider hasn’t always been a record producer, however. Prior to opening Rundown Studios in Jan. 2009, he worked several other jobs. He currently works as a full-time firefighter in Lawrence and previously owned his own business selling mutual funds.

“As far as the business end of it goes, a lot of us are taught that we should go and get a steady job,” said Schneider. “Which there’s nothing wrong with that, and that’s the truth for most people. I’m the type of person, though, who could not do 8-to-4 or 9-to-5. It drove me out of my mind, and I literally was going to go crazy.”

While being a firefighter, musician and record producer may sound like quite a workload, he said that part of what makes his studio unique is the fact that he doesn’t rely on it solely for income.

“I did get a stable income as a fire fighter, but I’m off a lot,” said Schneider. “It allows me the opportunity to do different things. Opening the business then, for me, wasn’t like this huge risk. Nothing in here is owed money on. I paid cash and bought my equipment. A lot of it I had built up over time. The building I built with my own hands, and I only paid for the material, so that was about $5,000.”

Schneider said one of his main concerns with opening a studio was that it would become too much like a business, instead of focusing on the music. The fact that he didn’t need to rely on the income from the recording studio, however, was one of the deciding factors.

“That was part of why I did it, because so many studios charge $100 an hour, $200 an hour. They hire employees just like the coffee shop does,” said Schneider. “Sometimes your barista is good, sometimes your barista doesn’t give a shit. Well, the same thing with studios. Sometimes your engineer is good, sometimes your engineer doesn’t give a shit. He’s making 10 bucks an hour, and that’s all he cares about. He takes 10 smoke breaks, whatever, you’re paying good money. And then you get your mix that night. Anybody in the industry knows you should not mix anything the same night you record it, because your ears are shot. You can’t hear. But again, it’s a business, and that’s the breakdown.”

Schneider said having the stable job as a firefighter helps him to focus more on the artistic side of run the studio than worrying about the business side.

“Art and business have to co-exist, but they are not one in the same,” said Schneider. “So I tried to figure out a way to take the business out of it so we could make art and not have to worry about the money end. Now, do I charge money and make money? Yes. But we get that out of the way right at the beginning. I don’t have to pay my rent or feed my family with the money from here. Basically, just the money from here goes for this, so I’m able to work more creatively, I think.”

Schneider, who admits there are times when he stays up all night trying to get a song just right, enjoys having the freedom and flexibility of owning a small business, as well as the financial stability and peace of mind that comes from being a full-time employee as a firefighter.

Schneider cautioned, however, that businesses take years to start accruing income when they are first created. Even with his relatively risk-free business, the income didn’t come right away.

“Understand that any business has struggles,” said Schneider. “For the first several years, even before I started the studio, I made no money. I worked for free a lot.  I have guys who will come and say ‘Show me how to do this, how to make things sound the way you make them sound,’ and I can show them the techniques, but understand that until you spend hours and hours and hours and hours hearing it and learning what things do, it won’t happen. And most guys aren’t that crazy. I’m crazy enough to stay up all night long to figure something out and not go to bed, so that’s what it takes.”

Check out more about Rundown Recording Studios on its website at www.rundownstudios.com.