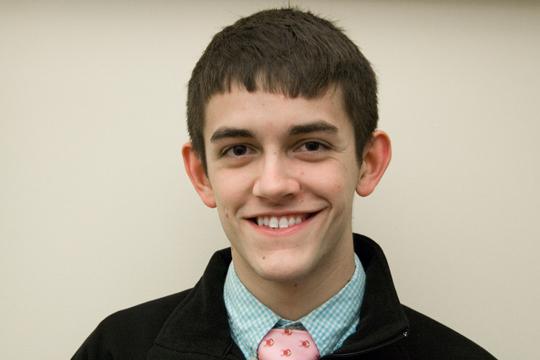 Future of Student Government Eric Benedict, WSGA chief-of-staff, directs potential WSGA senate members in filling out paperwork on Monday and Tuesday nights. WSGA accepted applications for senate and will be announcing the candidates for president, vice president and senate tomorrow.

WSGA is gearing up for the spring elections and accepting applications.

Monday and Tuesdays WSGA election information meetings only lasted about 10 minutes and gave out detailed information on the paperwork and forms that those interested in running for 2012 elections were required to fill out. Among the brightly color coded forms was a simple white piece of paper, yet it held equal if not greater importance. For those interested in running for WSGA senate, forgetting to sign the white piece of paper was an automatic disqualification from the running.

Each color serves a purpose.  Rules and regulations, a petition that allows you to obtain signatures, nominations and to simply sign your name. After following the rules and regulations correctly and meeting the qualifications, prospective senate members have options to help get their names closer on the ballot.

“There’s two avenues I can go. I can either be nominated by one of the activities that I’m a participant in, which is what this banana yellow sheet is for,” said Cassandra White, Freshman History major. White is a current member in the WSGA senate, considering re-election. “Then there’s the hot pink. He said magenta, but I’d say it’s more of a fuchsia. This is the old school petition to run, where you go around and talk to constitutes and just get people to sign. I do personally prefer this way, because not only do you get to talk to people, but they can come to you with ideas and they recognize your face. There’s nothing good about a faceless, nameless senate.”

Once elected into the WSGA senate, senators are then required to attend every senate and committee meeting. They can act as “liaisons” for organizations, communicating their wants and needs to the senate as a whole. These liaisons can help organizations with promoting events, paperwork or answering policy and other questions that may arise.

“It’s a great experience. It allows you to meet so many different people because you’re not just limited to the people in the senate,” said White. “The senate is just a forum. Who you really talk to are your classmates, are your peers, the teachers and the administrators of the campus.”

Students new to WSGA were also a part of the meetings.

“We hold elections every year so that we can cycle in new students and make sure that we’re running efficiently,” said White. “It’s always good to bring in new ideas.”

It’s  really good way to get involved with school, the campus,” said Chris Bird, Freshman. “Several of my friends are in it, and I’d like to do my best to make it even better than it already is. I don’t have any big ideas right now, but if something comes to my attention and I think that it needs to be changed or I need to say something about it, then I won’t hesitate to do so.”

Even after the green, orange, yellow, questionable fuchsia, the blue if you aspire for President or Vice President, you still have to gather up your nerves and not forget to simply sign your name on the white piece of paper.