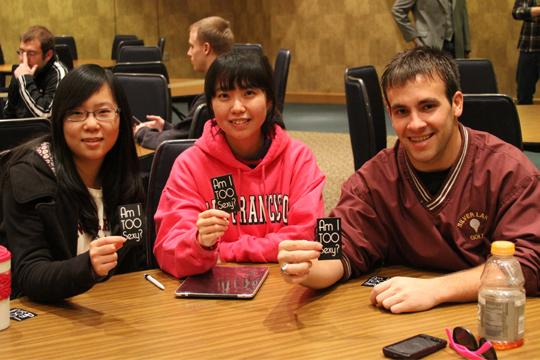 With a little bit of optimism and a message of diversity, Washburn students took in the message of a unique speaker.

Pearson used comedy, interactive activities and real life  experiences to connect to his audience. He brought about a strong message to campus about being proud of oneself as a person regardless of race, color or the languages spoken.

After the speech, Pearson was asked how he felt about student’s views on diversity.

“People don’t care much until something touches them,” said Pearson. “When people are affected by something, that’s when they’ll get involved. It’s great for people to be proactive, then to be reactive. Some people don’t care until it happens, then they try to catch it that way.”

Like the little sticker which says “Am I Too Sexy?” on every table, Pearson also put an emphasis on being optimistic and confident. He hoped everyone could remember that we are better today than we were yesterday.

“Ask yourself ‘Am I too sexy?’ when you have a tough day, just do something that will put a smile on your face and get you through the next day, always,” said Pearson.

“I think it’s awesome. He is a great speaker,” said Josh Rosebaugh, a junior forensic chemistry and biology major. “He has some really good stories to tell. He was very educated on diversity and he is just a cool guy.”

“We scheduled him because a couple of the CAB members went to a convention,” said Bianca Martinez, assistant director of talks and topics for CAB. “They saw him perform. Then they thought he was really good, and he talked about diversity in a fun way, not boring. He is a really funny guy, so they thought it will be really a good idea to bring him to campus.”

Martinez said the event did a good job of being thought provoking, yet also fun.

“We want an event that says a lot, but still entertaining,” said Martinez. “This is a really good event that we bring to campus, because I feel like Washburn needs more diversity on campus, and students usually don’t want to attend because it is a boring topic, but I feel like this will be entertaining and students will get a different perspective.”

CAB hopes to spread Pearson’s message of confidence and pride throughout the year.

“CAB is going to start doing diversity like this piece,” Martinez added. “There will be more diversity speakers. It is become like a set thing. That will be pointed out each year. “