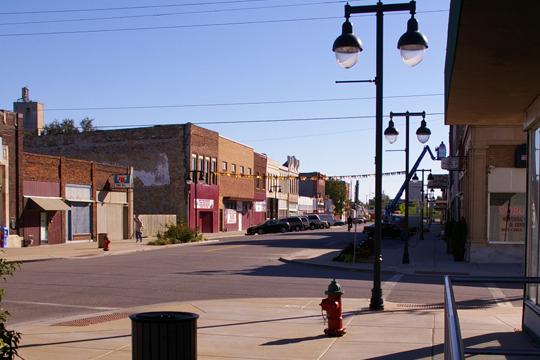 Rundown Downtown The Downtown Design project is looking for input on how best to renovate downtown Topeka. They have opened an office space downtown what is open to the public and specifically devised to address the downtown renovation.

Currently, there is an office space in downtown Topeka that not only has its front door open to the public, but is intended to get the public’s concerns and input on what they believe is best for the community as a whole.

Member of the Housing Neighborhood Development, Cody Bird, says that with The Downtown Design project currently underway, time is of the essence.

The entire project, according to Bird, is looking at the downtown.

“The infrastructure is getting old,” said Bird. “The gas lines near the street are 100 plus years old. Each building may need maintenance on their utilities, and some of the city water lines are beginning to have problems breaking. We’re looking to see if we can address all of these problems at one time.”

The construction team and design team on the project was contracted by the city.

Any firms interested in the project then submitted applications or past project works and basically submitted ideas that they thought would be a possible aspect for this project on the Topeka downtown.

Then, based on the proposals, the city made a decision for the construction and design team and hopefully what they will be working on doing to the downtown in the future.

According to Bird, the project has three main phases that the team is hoping to accomplish. Phase one, the council approving a $1 million grant for design and beginning construction, has already been complete.

Phase two is the conceptual design on what the end project will look like and is what the team is currently working on completing by the March 13th deadline, where the design will be submitted to be in front of a council.

If interested about The Downtown Design Project or if interested in becoming a part of it, please visit www.activatetheavenue.com for more information or look into attending one of the projects open houses, the latest, of which, was said to have hosted over 100 people.