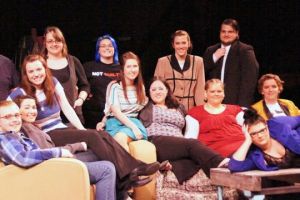 I recently spent half of the night out, not drinking with friends, but one thing about the night didn’t have flaws and uncertainties.

The evening started with “Flaws and Uncertainty.” I was aware that the play would be dramatic. I wasn’t ready for this level of drama.  The topic was unexpected, yet it was something that mattered. The main character Shelly, discusses her relationship with her girlfriend Andrea. You meet her girlfriend, but shortly after is when the tragedy takes place and the play truly moves forward, with many shocking twists.

“She never hated herself until you told her you should,” said Shelly’s character.

She often argued with Andrea’s mother, Diana. The mother was highly unsupportive of their relationship throughout the play’s entirety. The play was a good example of just how easy hate can spin a situation out of control.

“Drinking with Friends,” although a close call, is my favorite Washburn theatre department production to date. The only bad part of the play was when it was over. I could have watched it again and again. The dialogue was offensive and at times, highly inappropriate. I loved it.  The actions of

Leah were by far the funniest I’ve seen in awhile.  Her karate-like “Mitsubishi” moves literally had me laughing out loud.  I felt like I really knew the characters from the brief moments I got to know them on stage, and left wanting to make late night McDonalds runs with them for more chicken nuggets.

“A Night In” was also entertaining and comical.  It started off a little slow, just viewing the couple sitting around on their night in.  It finally begins with a simple, yet jarring question.

“How come I never buy tampons?” The guy asks his girlfriend.

They comically discuss their relationship and the relationship of their mutual friends.  I loved the story behind how the couple met: at a party with the girl singing the lyrics to a popular Buckcherry song. Although the shortest play of the night, it left a lasting impression.

Overall, “Wet Ink” was a fine production. What’s true for all three is that the dialogue and actions were completely honest and as real as can be. I only wish that student written plays were put on by the theatre department more often.