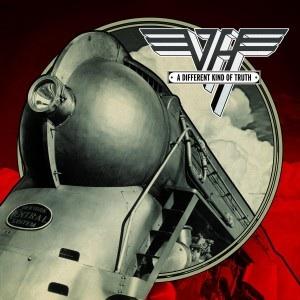 Let’s be honest here; when word hit the wire that we were going to be graced with a David Lee Roth-fronted Van Halen album (the first in 27 years), the gravitational pull caused by millions of eyes simultaneously rolling was enough to knock a few milliseconds off the Earth’s rotation.

Even the most loyal VH fan had to question whether the band had enough gas in the tank to deliver an album worthy of their legacy. Using the hokey sing-along “Tattoo” to re-introduce the band after a 14 year absence only added to the skepticism. Save for a healthy dose of Diamond Dave’s infamous vocal swagger, this tune was laughable at best. Thankfully, and the only reason why the guy driving the tour bus didn’t drop the band off at the nearest retirement home, the rest of “A Different Kind Of Truth” is quite entertaining. Recapturing the magic of their glory days, Van Halen struts through 50 minutes of material worth sinking your teeth (or dentures) into.

Half of the tunes on “A Different Kind Of Truth” were ideas born during writing/recording sessions back in the 70’s and Van Halen was able to successfully reincarnate them in a way that honors the past without sounding too dated. While this album isn’t nearly as solid as classics like “Van Halen,” “Van Halen II,” or “Fair Warning,” many of these songs would feel right at home on those records.

The honest approach the band takes is one of the album’s strongest points. Long gone are the days where an audience could be immediately dazzled by Eddie Van Halen’s fretboard pyrotechnics.

Don’t get me wrong, the dude can still shred and lays down plenty of solos that prove he’s still the master, but he’s been copied a million times since 1978 and the novelty of it all has worn off. The band puts the steak before the sizzle here and places heavy emphasis on songwriting instead of soloing. This approach pays off as tunes like “Bullethead,” “She’s A Woman,” “You and Your Blues” and “Chinatown” deliver that classic, energetic and entertaining Van Halen brand of hard rock. More good times come in the form of  the acoustic blues jam “Stay Frosty,” (an obvious sequel to “Ice Cream Man” off their debut), “Outta Space” and “Big River,” both of which have decidedly 1984 feel to them. A couple of less-than-stellar filler tracks – “Honeybabysweeitedoll” and “The Trouble With Never” – see the band trying to bring a bit of mid-90’s nu-metal into their sound. The word unnecessary comes to mind as these tracks roll by, but they do little to detract from the fun that is “A Different Kind Of Truth.”

Solid songwriting, steadfast allegiance to their classic sound and the ovation-worthy return of Diamond David Lee Roth, whose flamboyant and stylish delivery still outshines every other singer in the rock genre, all combine to make “A Different Kind Of Truth” a very respectable effort. Granted, I don’t see this one reaching the timeless status as many other VH albums, but it’s about 100 miles from horrible, to say the least.