Blues lose in second round 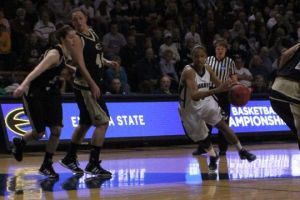 Having won in emphatic fashion on Friday, the Washburn Lady Blues looked to go for the four-peat against second round opponent and “Turnpike Tussle” foe Emporia State University.

However, this turned out to be easier said than done as Emporia State took the court with what Washburn head coach Ron McHenry described as loose play.

“I didn’t think playing four times was the big difference,” said McHenry. “But sometimes when you’re not expecting to win, and you’ve been beat three times, what do you have to lose? I thought that was really what their mentality tonight was. They just weren’t fearful to lose. It can work both ways. We had pressure of being the No. 1 seed and hosting, where they were pretty loose and ready to play.”

In the first half, the Lady Blues came out on fire. With explosive shooting and crashing the boards in the first eight minutes of the game, Washburn built a 15-5 lead.

This lead however didn’t phase ESU.

“We fought back in this game,” said Emporia State head coach Jory Collins. “Washburn is so aggressive on defense that if you pass on a look, you might not get another one the rest of the possession. I thought we had players tonight that took the first open shot.”

In particular ESU guard Jocelyn Cummings let the game come to her as she went 3-for-4 from the floor in the first half and 10-for-14 to finish the game with 27 points. Many of the points came off of plays designed to attack the rim. Something that Cummings took advantage of all night.

“I just thought it could’ve been the last game for our seniors and I didn’t want that to happen,” said Cummings. “I just kept taking it to the hole.”

At the half, Washburn trailed just three points. As both teams fought, the momentum began to swing toward ESU. At the 15-minute mark, the Lady Hornets opened up an 11-point lead on a 9-0 run. The lead would continue to balloon to as much as 13 points before the Lady Blues cut the lead down to just two points with less than 30 seconds left in the game.

Playing pressure defense, Washburn was able to force a turnover getting a steal from senior guard Stevi Schultz. The ball would quickly find its way into the hands of senior guard Ebonie Williams. Shooting from the corner with just 24 seconds left to go in the game, Williams’ potentially game-winning shot went off target. ESU would hit four free throws as Washburn fouled to try and stay in the game. When the clock hit zero, Emporia State earned their first win of the year against Washburn when it counted most, 71-65. Afterwards McHenry gave credit to ESU.

“We just didn’t seem look like ourselves all night,” McHenry said. “(The Hornets) came out with a purpose and used the on-ball set, I bet 60 or 70 percent of their sets were that play.”

Washburn ended the season 29-5 on the year. The Lady Blues won the regular season and MIAA conference postseason tournament as well. Emporia State moved on to play Pittsburg State University in the South Central regional championship game, where the Lady Gorillas won 79-67.