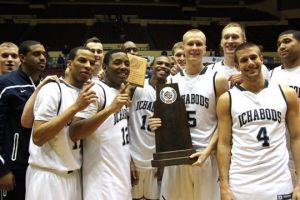 The Washburn Ichabod basketball team may have been co-champions of the MIAA during the regular season, but this past weekend they proved they were the best team in the MIAA. The Bods pressured their way to the MIAA conference tournament title at beautiful Municipal Auditorium in Kansas City, Mo.

Although the MIAA tournament may have been in Missouri, the Bods had to go through Kansas to win it. Washburn had to defeat three Kansas schools to cut down the nets.

“I’m excited for them,” said Washburn head basketball coach Bob Chipman.” It’s all about them.”

No. 1 seeded Washburn got pitted against No. 8 seeded Emporia State University in the first round. After a dismal first half performance the Bods were able to pull away in the second half for a 67-51 win.

Washburn got on a 10-0 run midway through the first half after sophomore guard Jared Henry nailed a trey. ESU struggled with Washburn’s man to man defense. The Ichabods pick-pocketed the Hornet guards as seven of their 19 turnovers came in the first half.

“Defense is going to win us games,” said junior guard Will McNeil. “We knew we had to put our big boy shoes on.”

Washburn failed to close out the first half, allowing Emporia to climb back in it. The Bods gave up nine offensive rebounds while shooting an abysmal 1-9 from behind the arc and went into the locker room tied at 26. Junior guard and leading scorer Will McNeill struggled to score in the first half only scoring six points. McNeill found his groove in the second half in route to a game high 27 points.

ESU was unable to handle the faster Washburn whose defense was just suffocating.

“Great defensive game for us in the second half,” said Chipman.

Junior guard Martin Mitchell nailed a trey with 14:19 left to give Washburn a 41-38 lead. McNeill hit the next two shots followed by another Mitchell three pointer causing an eleven point swing. The 11-0 run with a little over half the game still left seemed to be the turning point. The Bods commanded the lead for the rest of the game, slowly pulling away from their instate rivals. Despite losing the rebound battle by four boards, Washburn shot much better the second half and continued to play solid defense.

The Bods advance to the second round to face the No. 5 seeded Tigers of Fort Hays State University. The Tigers were able to hang in the first half, only trailing by two at halftime 31-29. Washburn shot a solid 46 percent from the field but gave up five Tiger three-pointers in the first half.

Washburn jumped on Fort Hays early in the second half. The Bods put together a seven minute run of 15-2, knocking down six of their seven shots from the field to stretch their lead to 15. FHSU was unable to catch up as they lost to the Ichabods 67-54.

“I have great respect for Hays,” said Chipman. “I thought they fought hard and gave us a good game. Great team win.”

McNeill stole the show scoring a game high 23 points on 8-12 shooting. Washburn shot 62 percent in the second half while holding FHSU to only 30 percent. Junior forward Bobby Chipman pulled down seven rebounds to lead the team as Washburn out rebounded Fort Hays 36-23 to advance into the MIAA championship game against the surprising No. 7-seeded Pittsburg State Gorillas.

Washburn looked a different ball club in the first half against PSU as the dynamic duo of junior guards Will McNeill and Martin Mitchell combined for only two points in the first half. With their two leading scorers v to even get shots off the Ichabods went to their big men early. Washburn was only able to muster up six points in the first six and a half minutes of play, all from junior forwards Zack Riggins and Bobby Chipman.

The Bods got a surge of energy from the bench as freshman guard Kyle Wiggins hit two big layups and sophomore forward Alex North knocked down two treys in the first half in place of the struggling McNeill and Mitchelvl.

“Kyle Wiggins, he was special tonight,” said Chipman. “Alex North hit a couple of big threes off the bench.”

Washburn shot a remarkable 54 percent in the first half from the field, going into half with a 30-25 lead. The Ichabods scored 18 of those points in the paint and got great production from their bench who pieced together 16 points. PSU was held to only six made field goals in the first stanza but five of them came behind the arc. They tacked on eight more from the charity stripe to stay within five of the Bods.

The Ichabods stretched their lead to ten off of Mitchell’s only basket of the game. The aggressive Gorillas dvidn’t back down, crashing the boards like crazy. The Gorillas managed to out rebound the Ichabods 39-17.

Washburn surrendered their lead with 4:33 left to play, trailing 53-52 after a PSU three pointer by Pitt State forward Rico Pierrevilus. Washburn answered with a pair of McNeill made free throws to regain the lead. PSU battled back tying the game at 57 with 2:45 left. But McNeill responded again with another two free throws.

“I want to come through big in those clutch moments,” said McNeill.

Despite a poor first half performance McNeill finished with a team high 16 points earning half of them vfrom the line.

Washburn closed the win from the charity stripe. Chipman added three more free throws in the closing minutes to avoid the upset. Chipman, who only had three rebounds in the game, got two of the them in the closing two minutes to help secure the win. PSU drove down and hit a three to bring the game back to within three but McNeill put the nail in the coffin with another free throw to put the Bods up with only a second left on the clock.

“He finds a way to get to the basket and score,” said Chipman of his junior guard.

McNeill garnished the Most Outstanding Player award as Washburn pulled off the 67-63 win. Washburn lost the rebounding battle but was able to force 21 turnovers which turned into eight fast break points and kept the Gorillas out of rhythm offensively.

“Our guys got bumped a few times,” said Chipman. “I like the way they just kept coming back and standing up and didn’t back down.”

The resilient Bods proved why they were the No.1 seed and will look to carry the momentum into the NCAA tournament. Washburn nabbed the No. 4 seed in the South Central Regional. They will face Northwest Missouri who swept the Ichabods in both regular season meetings. The two teams will meet Saturday, March 10th in Wichita Falls, Texas.

“I’m so proud of these guy,” said Washburn head basketball coach Bob Chipman. “They found a way to step up and win.”