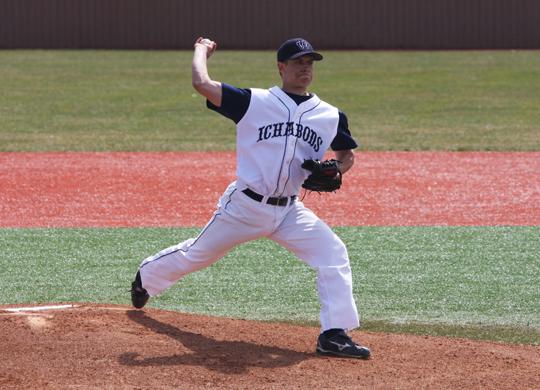 Anticipation mounted as the Washburn Ichabod baseball team opened with their first home game of the season. Sporting a 2-2 record coming in, the Ichabod team was trying to take the win to give them their first winning record of the season.

Mark Biesma got his first career start for Washburn, but it did not quite go the way he had hoped.

The top of the first inning saw Rockhurst jump out to an early 2-0 lead, mainly given up to the triple by the Hawks. To make matters worse, an error to start off the top of the second moved another Hawks’ player into scoring position. This player was later driven in to make put the Bods in an early hole.

It seemed like they would be up to the task as they were able to drive in a run. Centerfielder Tyler Bailey got into scoring position on a Rockhurst throwing error. This gave shortstop Blaine Matthews the opportunity to drive in the run, and he did just that. A base hit up the middle scored Bailey and made the game 3-1.

However, from this point through most of the rest of the game, it was all defense and pitching.

Biesma was able to pitch through five innings and only gave up the three runs from the first two innings. Brett Ash came into relieve and was able to keep the Hawks at bay, only giving up two run in the four innings pitched.

Both pitchers combined for 10 strikeouts in the game.

“We struggled at different times on the mound but overall kept the game close,” said Head Coach Steve Anson. “It’s out pitchers jobs to keep the game within reach, and they did just that.”

With the pitcher’s efforts to keep it close, the bats just could not come alive to take care of business.

The Ichabods were able to score one more in the bottom of the seventh when designated hitter Brent Matile grounded out with third baseman John Calhoun running at third.

Down three in the bottom of the ninth, the Bods were looking for a rally to keep things interesting. Calhoun led the effort with a one out single to right field. However, after a second pickoff move in a row, the Hawks were able to pick him off.

With two outs, Washburn saw first baseman Tyler Bean walk and Matile single to left field. With the game tying run at the plate, catcher Richard Swan stepped up to the plate. After battling with the count for a while, Swan unfortunately popped up to the first baseman and ended the hopes of the Bods.

“We just struggled today putting the ball in play and getting base runners,” said Anson. “Without runs, you can’t win games, it’s that easy, we have to hit the ball and score more runs.”

Following the loss, Washburn responded with a 10-4 victory over Newman Tuesday afternoon.

After falling behind 4-0, the Ichabods scored 10 unanswered runs. Senior infielder Calhoun went 5-for-5 from the plate and scored three runs. With the win Tuesday, the Ichabods improved to 3-3.

The baseball team will be in action again March 9 and 10 at Pittsburg State University, where they start conference play.