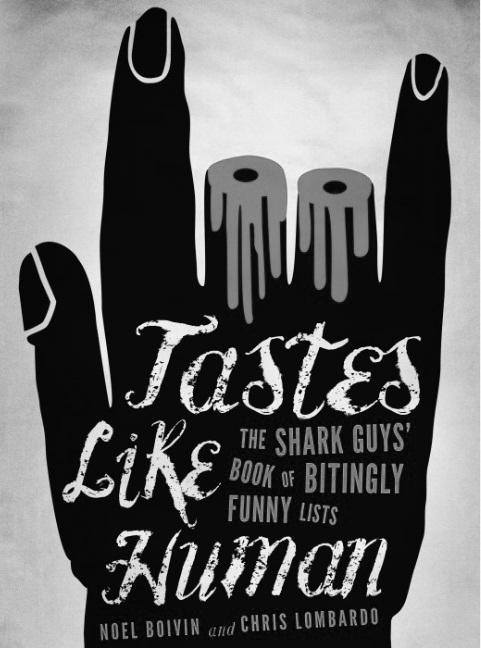 A recent delve into the book “Tastes Like Human: The Shark Guys’ Book of Bitingly Funny Lists” by Noel Boivin and Christopher Lombardo proved to be an entertaining end to a boring week.

“Tastes Like Human” is a book of lists, as the title suggests, compromised of topics that one might find oddly interesting, insanely amusing or even practical. The introduction opens the book up to the quirky and almost sarcastic side of the authors with their reasons behind creating this book of lists.

For example, Noel Boivin and Chris Lombardo say “they give people who don’t follow the news and aren’t obsessed with people something to talk about – top films featuring fruit in the title…or top celebrities with whom I would readily fornicate if they suddenly took an interest in poor, unknown people who make up fantasy lists in bars.”

This  book can be seen as the e-print version of television’s World’s Dumbest in many of its lists, including things such as “Top 8 Criminal Prank Calls” or “Top 8 Great Achievements While Sitting Down.”

If you’re looking more for laughs, I might suggest taking a look at the section of lists concerning the “Top 15 Reasons Sharks Are Better Than Cats” or perhaps “5 Ways To Spruce Up Your Resting Place.” Speaking of which, have you ever considered giving your gravestone a theme song to be pressed as people walk by it? I, for one, may have something to add to my list thanks to this book.

Practicality also appears in “Tastes Like Human” in lists about college degrees and professions, and even a few lists about elevator, ATM and dating etiquette.

The best part may very well be the easy read and organization of a book of lists. In a hectic college schedule, spending hours on dry material is often the last thing on many students’ minds.

So in the spirit of Boivin and Lombardo: The Top 3 Reasons To Read This Book

3. The easy read and nature of the book allows even the busiest of students time and ability to sit down and dive in.

2. Genuine laughter cannot often be found in college textbooks of any nature, and everyone needs a bit of funny in their life.

4. If you can not remember the last time you picked up a book that wasn’t for class, it may be about time you did. If you can and it was not “Tastes Like Human” you have been missing out.

After all, the e-book is only $2.99 on Amazon.com, and if you’re anything like I was when I discovered this book, all of your friends gathering around you to read it, as well, will be well worth a few dollars.