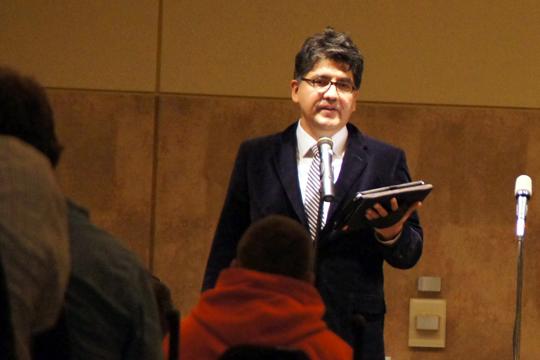 Spreading Diversity Sherman Alexie, famous Native American author, addresses Washburn students Friday night. Alexie spoke about his childhood growing up on the Spokane Indian Reservation and the challenges he has faced as an adult.

His speeches were welcomed by audiences, from children to adults. He spoke about his childhood, hometown, college life and his experiences overseas.

Alexie is an author, poet and screenwriter, named one of the NewYorker’s 20 top writers for the 21st century. His books have won national awards, and his film “Smoke Signals” is famous, as well.

At 3:30 p.m., Alexie met Washburn faculty at Henderson 100. His topic was diversity in America. There were more than 60 people who attended, and laughter filled the room. He recalled his childhood and experiences on the Spokane Indian Reservation in Wellpinit, Wash. He also talked about his school life, including college.

Alexie said white people had many misunderstandings about Indians ranging from culture to daily life.

“I try my best to connect with white people as a normal one, but they treated me as a minority,” said Alexie. “I hope people change their mind and treat brown people just as you do to white ones. It is diversity.”

After the meeting, the audience spoke highly of it.

“I enjoyed the speech, because he was entertaining to listen to,” said Kelly Erby, a professor in the history department.

An hour later, Alexie communicated with 40 Washburn students. He shared his experiences in a small town and the basketball team in high school. He also talked about his college life. He felt he was separated by his accent, experiencing cultural shock and amazement at how white people call others by last name. He was also misunderstood by his college classmates, because he could speak many languages.

“It is really a small town and everyone is related to another, even our teacher,” said Alexie. “We were isolated. So when we moved to Seattle, my parents were so excited about this.”

At the end of the student meeting, students applauded Alexie.

“I liked the speech,” said Cassandra White, a freshman history major. “He talked about his own experience and his personality and both were very exciting.”

At 7 p.m., Alexie gave another public speech. Most of the chairs in the room were full. His jokes amused people and made the atmosphere very engaging. He related his feelings from when he visited London. He thought he was the only Indian in London until ran into an childhood friend from the same reservation. He also talked about the Internet and his daily life.

“It was a very attractive speech,” said Chenchen Hao, a senior English major, “I liked his facial expression, jokes and his attitudes toward life.”