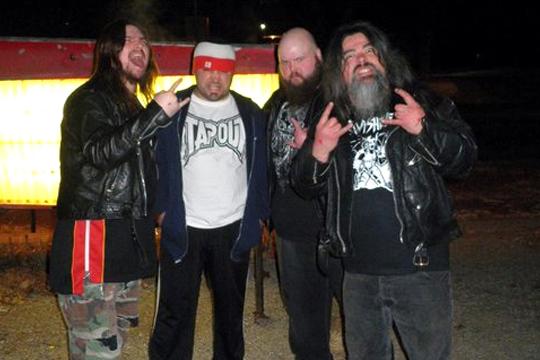 Confined in Flesh From left James ‘Jimbo’ Watson plays guitar, Nathan Serrano plays bass, Brian Owensby sings and Jaime Serrano is on drums. The metal band was formed in 2007 and is originally from Topeka.

To mainstream music audiences, any mention of death metal immediately invokes stereotypical images of demonic and gore-filled artwork with teeth-grinding sonic mayhem played by musicians who appear to be cut from society’s roughest edges.

Sure, these generalizations might be accurate to an extent (and a sarcastic source of pride to those involved,) but to the genre’s legions of rabid and loyal fans, death metal is so much more.

For some, death metal is a cathartic release of aggression brought on by life’s frustrations and for others, it’s a chance to showcase excellent musicianship in a way that goes against the grain of popular music. At its core, death metal’s inherent intensity provides a chaos-fueled good time for fans and bands alike. One band that encompasses all three of these elements is Topeka’s Confined in Flesh.

Formed in 2007 by local metal scene veteran and multi-instrumentalist Jaime Serrano, the seeds of Confined In Flesh were planted when Serrano, whose primary weapon of choice is the drums, began to record song ideas at home on his desktop and an old-style Tascam reel-to-reel recorder.

As the ideas started to flow, Jaime recruited his brother, Nathan Serrano, to come in and play bass and rounded out the lineup with acquaintances from the local scene. As is the case with many bands, Confined In Flesh underwent its share of lineup changes, but by early 2009, the band’s roster was solidified with the addition of guitarist James “Jimbo” Watson and vocalist Brian Owensby.

Both longtime friends of the Serrano brothers, Watson and Owensby came into the fold after a series of impromptu jam sessions in the band’s rehearsal space and Jaime quickly began to see his vision unfold. The addition of Watson gave the Serranos a third hand where songwriting was concerned and allowed the band to evolve into the beast it is today. ”

“Jimbo is a very aggressive guitar player,” Serrano said about his axe-man. “He’s grown a lot since we started jamming. I’m totally happy with him in the band.”

With an aurally pummeling sound crafted after renowned death metal acts, such as Suffocation and Cannibal Corpse, Confined In Flesh also draws influence from the breakthrough and highly-influential Pantera and legendary jazz drummers Buddy Rich and Louie Bellson (two of Jaime’s personal favorites) for a sonic assault that has made the band a favorite among local metal circles.

The ferocity of Confined In Flesh can be heard on its self-titled debut, which was recorded at 1009 Recording Studio in Lawrence, by engineer and Topeka native, Sean Thompson.

But to get the full effect of the group’s rage, its live show is highly recommended. Having given multiple performances at the popular Topeka music venue The Boobie Trap, Confined In Flesh has made excursions to Omaha, Neb., Manhattan and Lawrence, but tends to deliver its best performances when out of their element.

Invading local bars that are typically known more for classic rock cover bands or a spot to catch the game on a big screen, Confined In Flesh has riled ordinarily subdued crowds at places like Victoria’s, 39th Street Bar and Goose Again into a frenzy of banging heads. It’s always a party when Confined In Flesh is on stage.

Good times, however, don’t come without hard work and Serrano’s dedication to his craft goes unrivaled. Adhering to a strict DIY ethic, Jaime handles booking, promotion and merchandise all from home. It’s a labor of love that the drummer can’t envision giving up anytime soon and the other members of the band fully understand the sacrifice that comes with playing this particular brand of music.

“If you’re in this to make money, you’re in the wrong place. You have to love death metal if you want to do this,” said Serrano. “It’s not about being a rock star. I just love to jam and play metal.”

While Topeka may not be known as a national hotbed for metal bands, Serrano is quick to point out that the local scene is thriving and encourages folks to get out there and show support.

“Topeka has a lot of great bands. There’s Origin (who has blossomed from local metal band to globally recognized innovators of death metal), Diskreet, Ravisher, Dark Apostle, Sedlec Ossuary and several more. There are a lot of killer bands here just waiting to be heard. It’s amazing how many good musicians we have in this town. Not just the metal guys either; there are a lot of good musicians here.”

For more on Confined In Flesh, visit facebook.com or reverbnation.com, do a quick search and get ready to have your speakers blown.