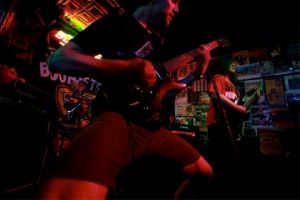 The ear-deafening, gut-wrenching, beat-blasting Sedlec Ossuary is back. After several months of lying dormant, the Topeka metal band has gotten back on its feet and erupted onstage last Friday, April 20 at The Boobie Trap Bar.

It’s been about two years since their last interview, and Sedlec Ossuary has gone through numerous changes: the hair length of the band members, their number of shows and the loss of their bass player, two lead singers and their long-time drummer. But the two founding members of the band, Hunter Hallman and Juan Saenz, managed to stick together through the hard times and kept playing and writing music. After finally finding a new drummer, Sedlec Ossuary started coming back to life and working toward what it once was.

“Over the past seven or eight months, we haven’t done anything,” said Saenz, a guitarist for the band. “We’ve been on hiatus.”

In their last interview with The Review, the band met and practiced at a storage unit in northern Topeka. Around this same time, Hallman, also a guitarist, moved from Lawrence to an apartment in central Topeka. With the approval of the band and surrounding tenants, Hallman and the band moved all their equipment into his apartment, where they practiced for several months, saving money by not having to pay for a storage unit. The superintendent was not too keen on the band practicing in the apartment, but the tenants, who were all friends of the band, did not mind.

Sedlec Ossuary, which is named after the Roman Catholic church in the Czech Republic that is adorned with thousands of human bones, experienced its first bump in the road with the loss of their first singer, due to personal differences. The band then went instrumental for a while and kept doing shows, even playing a free show in the basement of a house party in the winter of 2009. The remaining four members of the band stayed strong, continuing to play music while searching for a singer.

A new singer was found with little difficulty, but conflicting visions and interests caused another swift loss. Not longer after that, their bassist, Washburn graduate Conner Morton, informed the band that he would be leaving the county for a teaching job in Thailand. It was sad news for the members but the departure was in good spirits. Sedlec Ossuary held on for as long as it could before it finally collapsed, as the drummer decided it was his time to leave, and the band was down to two.

“We had everything rolling, then lost momentum, and picked it up at the wrong time,” said Saenz, “It all fell apart when we lost control of the band.”

The final loss seemed to be a dooming factor for the band, but Hallman and Saenz kept their chins up and had hope that Sedlec Ossuary would somehow resurface someday.

The hope they needed came by chance, or some may say fate, as Hallman randomly met a drummer at his place of work. The drummer was Dylan Watt, an undeclared freshman of Washburn University. The two hit it off, talking about metal music and the bands that they both loved. They made plans to jam together, and from then on, Hallman knew he had found Sedlec Ossuary’s new drummer.

“We just jammed, and it was insane. He was really good,” said Hallman, “He’s way humble. I think he just doesn’t know yet.”

Hallman and Saenz were ecstatic about their new addition, and their dream of getting the band back together was starting to take flight. They described Watt as “happy-go-lucky,” not taking anything too serious, but still staying focused. They said that Watt’s personal style of drumming fit the band better than their old drummer.

“Dylan is open to suggestion,” said Saenz, “He’ll either do what we tell him, or he’ll spin on it, and turn it into something he’s more comfortable with.”

Since Hallman and Saenz we’re still good friends with their old drummer, they decided that they would keep him up to date with the band, and told him all about their new drummer.

“We just had El Mezcal the other day and I told him everything,” said Hallman, “It wasn’t awkward at all, like it would be with an ex-girlfriend.”

Instead of teaching Watt the band’s old songs, they decided to teach him newer ones that followed in their new direction. Hallman explained that all material from here on out would be “new Sedlec” written with Watt.

“You will definitely be able to tell there’s a difference there,” said Saenz. “We have material that can appeal to more people than just metal-heads.”

In regards to a singer, Hallman stated that they were going to just “let it ride”, saying that they realized that a singer and a bass player were not necessarily needed in order to write music. Although Saenz and Hallman expressed that it would be nice to find a full time singer that fits their style, they explained that it takes a lot of work to add a new member.

“We’ll get one when we get one,” said Hallman.

When they made their comeback last Friday, the band was second to last to play, and went on stage without a singer to slay the crowd with a loud, fast, and brutal instrumental set.

“We’re still down with showcasing our stuff with just guitars and drums,” said Hallman, “And when people see that, they’ll know we’re still driven and going for it.”

Hallman and Saenz both agreed that in a year or two from now, they would like to see themselves signed and on the road. While getting signed with a label is not all that important to them, they both expressed that they crave to experience going on tour.

“Hopefully in a year we will be back to how we were two years ago,” said Saenz.

Sedlec Ossuary’s music can be heard online on MySpace (myspace.com/sedlecossuarymusic) and on their Facebook page (facebook.com/SedlecOssuary.)