Saturday Market opens to all in Topeka 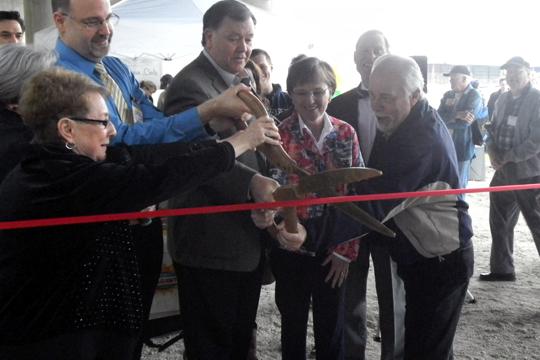 The NOTO Saturday Market opened last Saturday, and although it was rainy, they still kicked it off with style. Because they chose the location under the Kansas Avenue bridge, the rain was not a problem and in the future, the sun won’t be one either.

The ribbon cutting started at 9:30 a.m. and included speeches by various people in the community who have been largely involved in promoting and making the market become a success. They included, John Hunter, co-chair for NOTO, Kansas senator Laura Kelly, Barry Feaker, director of the Topeka Rescue Mission, Randy Speaker, deputy city manager of Topeka, John Knight, director of Shawnee country parks and recreation, and William Beteta, executive director for Heartland Visioning. They each spoke about their part in making the Saturday market happen.

Anita Wolgast, co-chair for the market, started by introducing everyone involved and talking about the market being under the bridge.

“This weather was planned,” Wolgast said referring to the rain. “We wanted it to rain so you could appreciate that bridge covering you, and that same bridge will cover you when the sun is beating down on you this summer. We think it’s the perfect location.”

Kelly was largely involved in visioning North Topeka as somewhere that would be great for antique dealers to be located. She owns an older, large house that she enjoys filling with antiques and frequently goes antiquing. Kelly knows that people want to be able to search for antiques in one area, not spread out, which got her to thinking NOTO would be the perfect spot in Topeka for an antique district.

“I like antiques, go to antique stores on a regular basis,” said Kelly. “I never thought it would happen, but fortunately we have [Wolgast] and [Hunter] and all the others have been involved in this, it’s been miraculous to watch. This is just the beginning. This is going to grow. This is going to be huge and become a destination.”

Jim Ogle, board member for NOTO, had some interesting things to say about the development of NOTO Saturday Market. He came across many negative comments in his journey to make the market become a reality.

“I was told many times that, ‘It’s not gonna happen in Topeka,’ ‘Things like this won’t happen in Topeka,’ ‘Nobody will buy into this attitude,’ ‘We have artists in Topeka?’ ‘You’re not gonna be successful,’ – all sorts of crap, pure D crap,” said Ogle. “It’s good in our fields as fertilizer, but we did a little fertilizing here in North Topeka and look at the success we’ve had. Collaboration works. The next time you hear someone shooting off their mouth that they can’t do this in Topeka, tell them we can and we did.”

Jerry Farley, Washburn president, was also present and had a couple of his own things to say. He contributed the success of NOTO to the power of partnerships and people working together in our society to make something great happen.

“The hurdles that had to be overcome to make this happen were absolutely incredible,” said Farley. “Money was an important part of it, but people were really the key to it, and they have amassed, got all of you involved. They’ve got a board that’s active, they’ve engaged the mission, the city, the television stations.  All of this occurs because of what they started with, and it really is what they started with. This idea of partnerships is what made it happen in the end. Each one of you is willing to contribute your time and your effort, and each one of you is willing to dream that this could actually occur, and without that dream, we couldn’t be standing here under the bridge.”

Beteta finished the ribbon cutting event by joining everyone in a celebratory “Wahoo!” Beteta said he has become known as “the wahoo guy” and explained it’s all about celebrating.

“It’s about when we have things like this, we want to celebrate,” said Beteta. “Because when we celebrate, we get excited and when we get excited, we want do more. That is what we are trying to do with a community like Heartland Visioning; we want to do more.”

Beteta then led the crown in one big “Wahoo,” where everyone raised their hands and yelled it at the top of their lungs.

The NOTO Saturday Market will be held 7 a.m. until Nov 3, 2012. For more information, go to their website, notoartsdistrict.com/noto-saturday-market.