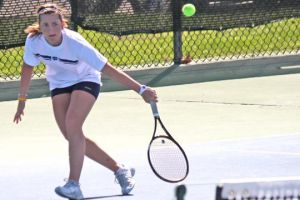 Domination. The word pretty much sums up the match between the Washburn Lady Blue tennis team against MIAA opponent Lincoln University of Missouri.

“I’ve never been a part of a match that has been that lopsided,” said Washburn head tennis coach Dave Alden.

In nine matches consisting of 15 sets, the Lady Blues only failed to win three games. Seniors Jamie Blackim and Alyssa Castillo won 8-3 in the opening No. 1 doubles match 8-3. The Blues would not lose a game the rest of the day.

“We still really focused all the way through,” said Alden. “We expected to play well but you never expect to have the scores that we did.”

The Blue Tigers of Lincoln came into the match struggling with a 0-7 record on the year. It was a matter of taking care of business for the Blues and not overlooking the Blue Tigers.

“Sometimes when you play somebody you outmatch it’s easy to play down. But we didn’t lose focus,” said Alden.

Another senior duo of Morgan Rainey and Whitley Zitsch won 8-0 in No. 2 doubles while freshman Casyn Buchman and sophomore Sophie O’Neill blanked Victoria Banks and Gabrielle Quinn in No. 3 doubles.

The early lead did not relax the Lady Blues. Instead of getting complacent Washburn finished singles play with pride. Rainey easily won No. 1 singles while her doubles partner, Zitsch swept Kamaria Brave in No. 3 singles. Blackim, Buchman, and Castillo dominated the lower three singles spots with little problem.

O’Neill was the last to finish her singles match as the Lady Blues came away with the sweep in a little over two hours of play. It was an impressive showing and a much needed win for Washburn. The win brought the Blues back within one game of .500 and game them a comfortable 3-1 record in conference play.

“You always want to peak at the right time and it feels like maybe we’re heading in that direction,” said Alden. “For us if we want to do what we’re capable of doing when need to play well and win the conference tournament.”

Washburn will face off April 11 at 2 p.m. at a home match with Northwest Missouri State University.