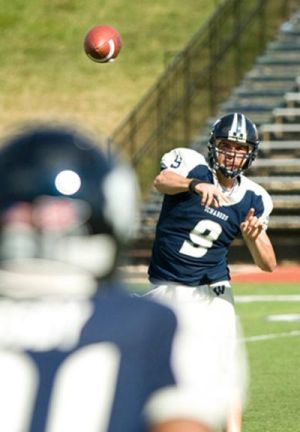 For collegiate athletes, there are many cases where realizations come that playing days will end after the final game of senior season.

Dane Simoneau, however, is the rare case at Washburn of an athlete who is looking to take his career to the pros in the National Football League.

After having a successful year that featured 10 wins, a first-in-the-program playoff win and finishing in second place by only three votes for the Harlon Hill trophy-the MVP award for Division II football-the Salina, Kan., product has been busy getting ready for all the steps necessary for a pro career.

“I’ve been working out a lot and just training to get myself ready,” said Simoneau. “The process is really intense, but I feel like I’ve been working really hard, so it’ll all pay off soon.”

While Simoneau has been busy getting ready, his performance has had an influence on those that remain at Washburn. Washburn head coach Craig Schurig has been busy with spring practices, but is still mindful of what having a player like Simoneau does for a program.

“Him getting into a camp would be another great step for us,” said Schurig. “To be able to have as many guys as we’ve had go to the NFL really speaks volumes about the dedication that all of our guys are putting in here.”

“Yeah, we had guys get the chance to get in front of 20 different teams, so that was a great deal for those guys,” said Schurig.

The quarterback then returned to Washburn on March 27, where he and other players went through various drills showing off what they were capable of in front of the Kansas City Chiefs. Simoneau took the process in stride.

“I was relaxed in front of them,” said Simoneau. “I thought it went really well.”

Most NFL scouting firms have Simoneau ranked in the top 50 of quarterbacks available for the draft. He is ranked as high as 39 and as low as 46 by most firms. Schurig, however, thinks whichever team gets Simoneau will get more than is advertised.

“Dane is so much more than anything you can measure on paper,” said Schurig, “The one thing that we’ve gotten back from scouts is how they are so impressed with the work ethic of our guys. They always tell us how hard our guys work and how that sticks out to them.”

If Simoneau does get drafted, he will be the fifth player since Schurig arrived at Washburn in December 2001 to suit up in the NFL. Former teammates Michael Wilhoite and Joe Hastings are currently on the roster of the San Francisco 49ers, while Cary Williams just finished playing the 2011 season with the Baltimore Ravens. Former Washburn defensive tackle Trey Lewis is currently not on an NFL roster, but started out with the Atlanta Falcons.

Regardless of what happens during the NFL draft, scheduled for April 26-28, Simoneau looks forward to getting on the field and pursuing a lifelong dream.

“I can’t wait to show them what I can do,” said Simoneau.