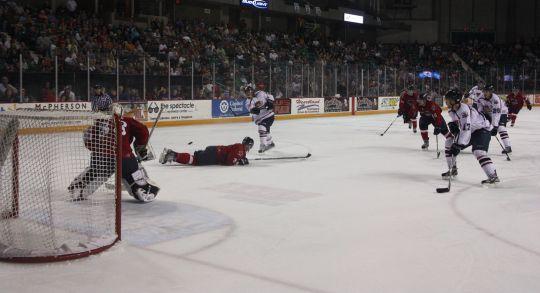 Clutch Ryan White [12] fires the game-winning shot past Amarillo Bulls goaltender Mike Taffe on Thursday night. White had two goals in the contest as Topeka rallied from a 3-0 deficit to win 6-3.

Coming into Thursday night, the Topeka RoadRunners were just looking to stay alive in the South finals.

Trailing 3-0 in the second period, Topeka used three goals in a 1:29 span to tie the contest and took control from thereon, winning 6-3 at Landon Arena in front of 4,288 fans.

“We were just making smart puck decisions,” said Scott Langer, Topeka head coach. “Some of those pucks that have gone off referees and sticks and stuff, the luck changed tonight, whereas in the first two games, it would have been in the back of the net.”

Forward Omar Mullan started the scoring for the Bulls at 4:36 of the first period and defenseman John Rey increased the lead to 2-0 at 6:54. Early in the second period, Mullan scored at 3:43 before Topeka started their offensive showing.

Defenseman Trace Strahle started the scoring on the powerplay at 8:45 when he fired a shot from the blue line that found its way past Amarillo goaltender Mike Taffe. Forward Brian Christie then fired a shot past Taffe at 9:48 to make it 3-2 Amarillo. Defenseman Chris Bond tied the game on a shot from the left faceoff circle at 10:16.

Many of the 4,288 in attendance rose to their feet again at 5:33 of the third period, when forward Ryan White scored his first of two goals, which eventually was the game-winner for the contest.

“When the crowd gets into it like that, it really sparks the whole bench and gets everyone going,” said White.

Forward Kyle Sharkey fired a shot past Taffe on the powerplay at 12:09 to make it 5-3 and White then finished off scoring at 16:42 when he took a quick wrist shot from the slot.

Topeka outshot Amarillo 36-25. In the victory, goaltender Peter Traber stopped 22 shots for Topeka. Taffe stopped 30 of 36 in the loss for Amarillo.