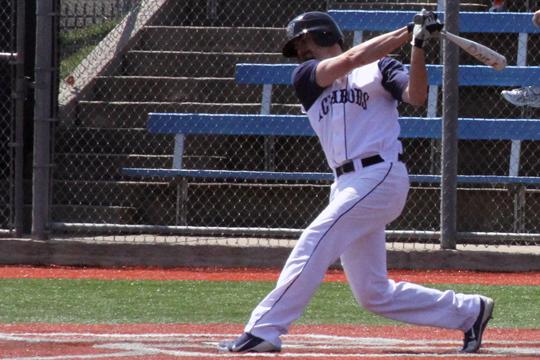 Big bat Senior third baseman John Calhoun is one of the most touted infielders on the Ichabods.

When one gets into a fight, they always want support from people they can trust that will have their back. When a pitcher goes to battle with a batter, the infield does just that.

“It’s our job to make the easy outs that the pitcher gives to us,” said Blaine Matthews, senior shortstop. “We should get almost all of the ground balls and some line drives to help the pitcher out.”

The infield may not get the out every time, but they still focus on keeping the baseball in the infield. If a ball gets into the outfield, there is an increased chance that a runner will try to go run for another base.

The infielders sacrifice everything they have to keep the ball in front. Whether it is a glove, chest or even face, they use whatever they can to knock it down.

“This is big because it keeps our pitcher from getting down on himself,” said Matthews. “A single is so much better than a double or letting a runner from second get all the way home.”

Blaine actually enjoys diving the most. He hopes to knock it in front, but there are occasions where he still gets it clean enough to make the out. He also enjoys the double play.

“Obviously, it helps cause we get two outs of the deal,” said Matthews. “But even more, it boosts the confidence for everyone that we can make the plays we need to win.”

However, to get outs during the game, the infielders use a different throwing motion than most. Instead of getting a full windup and really throwing with everything, they “short arm” it. This means they go directly from their glove to their ear with the ball in an attempt to make the throw quicker.

Third baseman John Calhoun has had to master this art as he fields the ball and has the longest throws to first.

“It’s really important to know our throwing motion, but even more important to just stay in the game,” said Calhoun. “We always communicate and know exactly where we’re going with the ball if it is hit to us.”

Calhoun not only prepares mentally before each pitch, but prepares rigorously all week for games.

Calhoun likes to vary his workouts to keep himself stretched out and feeling good during the week. He uses lifting, running, stretching, throwing, hitting, and even eating to help himself prepare.

“Everything keeps the blood flowing in different ways to keep my body loose,” said Calhoun. “Then when I eat, I focus on what my body will need to run off of to be successful and play my best.”