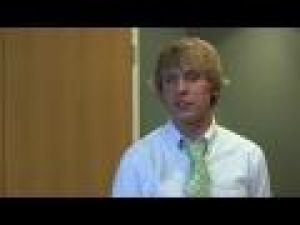 Washburn University debate seniors Lauren Knoth, Independence, Mo., and Joshua Ramsey, Fort Scott, defeated a Texas Tech University team to win the championship round at the National Parliamentary Tournament of Excellence. The Knoth-Ramsey duo topped the nation’s best 64 intercollegiate parliamentary debate teams competing March 17-19 at Western Washington University, Bellingham, Wash. The other two teams in the NPTE Final Four, all top-ranked throughout the year, were both from Southern Illinois University at Carbondale.

Knoth also was crowned the Top Speaker at the NPTE from a field of 128 speakers, which also means the NPTE Top Speaker championship returned to Topeka for the second year as fellow Ichabod Joe Allen, Boise, Idaho, won the award in 2011. Ramsey won the NPTE Second Place Overall Speaker award. Allen also was recognized as the Top Preferred Judge at the 2012 NPTE tournament.

Knoth also was named as a NPDA All-American, which recognizes graduating seniors who have excelled at school, debate and community service. Only one All-American is recognized from each of NPDA’s ten districts plus three more at-large.

Knoth, who is majoring in sociology and criminal justice with an emphasis in security administration, is the daughter of Trish Boone and Joe Knoth and a graduate of Truman High School. Ramsey, a legal and corporate communication major, is the son of Laura and Joel Ramsey and graduate of Fort Scott High School.