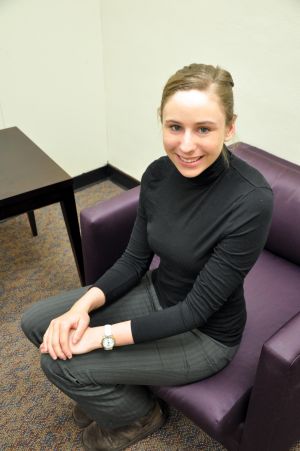 As 2012 continues at a rapid pace, one topic becomes much more debated: the elections. Most people have a political preference and look at their own party’s nomination to select a president. Others just vote to say they have voted.

One student at Washburn University not only votes and has an opinion, but has strived to voice her opinion and work towards what she believes is right for quite some time.

Junior Breanna Short has been involved in the Kansas Federation of College Republicans for two years now. When she first came to Washburn, she was an accounting and finance major, with a pre-law emphasis. However, after becoming a member of Washburn’s own college republicans, she became more and more involved with the politics of the state of Kansas and the entire nation.

Growing up in Hesston, Kan., Breanna was very involved in sports and organizations. Being a three sport athlete for all four years on varsity, sometimes it was difficult to find the time to complete everything she needed to with school, church, extracurriculars and a social life.

To add to the crazy schedule, Short is the oldest of six children, the youngest being two years old.

“It’s because of my siblings that I love children,” said Short. “It’s all about helping those who can’t help themselves.”

With her schedule almost jammed full, Short did not once think about dropping a single event. Her parents instilled in her the values to give it her all and never quit. This helped her become a vocal leader in the things she believed in and taught her to keep strong in what she believed was right.

And politics became something she strongly believed in. After growing up in a Catholic church setting, Breanna always saw the republican point of view in hot topic debates and realized she believed in many of the same viewpoints.

“I wanted to get involved as much as possible,” said Short. “I had a great opportunity to meet with other college republicans and realized this was a strong group of people that I wanted to be around.”

She is extremely proud of this position and eager to get started helping with the elections. The organization has already planned to put together a fundraiser so they can help the republican nomination during the election run.

“This is a strong group that is always looking for more members that are interested in the same ideology that we have,” said Short.

Anyone interested in either the Washburn or the State republican group can contact Breanna at [email protected] for more information.