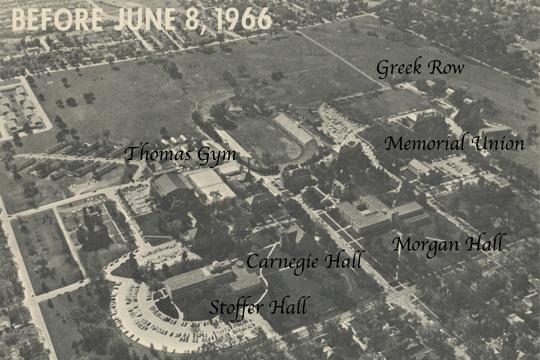 Lilly Moss, a junior in communications at Washburn, has never used the tornado shelter in Washburn Village.

“I’ve never had to come down here for a storm,” said Moss.

Moss is a residence assistant in the Village. On move-in day, Moss and the other RAs have an outside session for new students, where they explain the basics of severe weather safety on campus.

“In the session, we show residents where the storm shelter is,” said Moss. “We’ve never actually had a drill or a warning where we used the shelter.”

On Tuesday, March 13, the state of Kansas participated in a tornado drill. The drill was conducted by the National Weather Service and state emergency management teams. The drill implemented the actual “TOR” code, as used by the Emergency Alert System. The legitimate EAS code was used in the drill broadcasts on NOAA weather radio and local TV outlets.

According to the Topeka National Weather Service office, “local officials were supposed to sound warnings to initiate the drill. Area residents, businesses and schools are urged to treat the drill as if it were an actual tornado emergency. The purpose of the annual drill is to test everyone’s readiness for life-threatening severe weather events.”

Every weather drill and warning begins in the Shawnee County Emergency Management office, where they sound the tornado sirens–including the one on campus.

“The siren is so loud, you literally have to cover your ears if you’re outside,” said Dean Forster, Washburn chief of police.

The siren is relatively close to Forster’s office, but can be heard from as far away as the Village.

Moss says she can hear the siren in the Village, but encourages residents to be proactive with severe weather.

“We have a weather radio at the front desk, but I encourage people to get their own,” said Moss. “If I’m in my room and there’s a warning out, I wouldn’t want to go to the lobby to hear it.”

Weather radios are available online, and at every major store with an electronics section. Smart phone apps are also available, and recommended by Ron Rutherford,Washburn’s interim director of safety,.

“Most [of the apps] are free,” said Rutherford. “I’m not here to tell anyone what they need to buy, but if a student wants to keep up on the weather, then I think it would be a good investment.”

If there’s a severe thunderstorm or tornado watch, RAs are notified by the campus police. A watch is when there’s a possibility of severe weather; a warning is when dangerous weather is imminent. On Feb. 28, signs were posted on entrances to every residence hall warning people that Topeka was under a tornado watch.

That night, the town of Harveyville, Kan. was hit by a fast-moving tornado. Eleven people were injured and one person was killed. The tornado was on the ground for five miles, and lasted for less than a minute. According to the National Weather Service office in Topeka, the storm appeared to be weakening, therefore a warning was not issued. The town’s only tornado siren was not activated.

“We prepare for it and hope it doesn’t happen,” said Mindy Rendon, director of residential living. “We’ll call the RA on duty, despite the time of day. We want everyone to be prepared. Residents should make themselves aware of inclement weather, so they can make good choices on whatever they’re doing.”

Moss said she likes being prepared, but would rather not have to be.