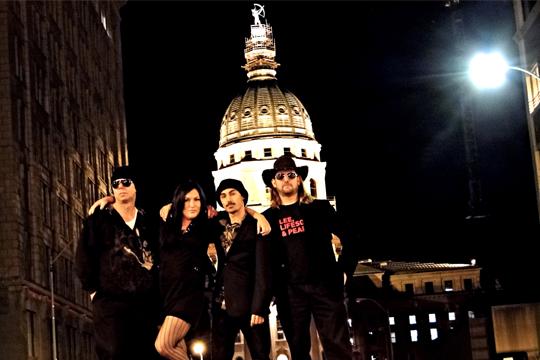 Out of the ashes of local rockers Smokin’ Joe comes one of Topeka’s most sonically diversified acts going today: The Rob Wade Band.

Consisting of founder/guitarist/vocalist, Rob Waltman, singer Janelle Parr, bassist Hudson Hamilton and drummer Nico Williams, The Rob Wade Band was given a name that Waltman felt would be more acceptable across different genres of music, which falls right in line with the band’s approach to their music. Combining elements of classic and modern rock, rap, funk and country, The Rob Wade Band offers a mixed bag of sounds and styles for their audience to enjoy.

“I’m a fan of all styles of music,” Waltman said in regard to his band’s varied approach. “I like a little bit of everything; it caters to whatever mood I’m in at a given time. I like some rap, so that works its way into the music. There are a few songs that we play live that have some funk elements, and I’ll throw a bit of rap in over the top of that, which people really love. You’ll hear a song with a classic-rock kind of vibe, too. People will hear a song they like and stick around for more. We’ll appease their needs.”

Waltman’s ability to blend so many genres comes from a lifetime of inspiration from a cornucopia of artists that spans multiple generations.

“My folks were into the old AC/DC, Queen, Van Halen and classic rock stuff, so a lot of that stuff breathes into my music,” said Whitman. “As I got older, I really got into Eminem, Dr. Dre and all those guys. Even the new country stuff that’s out there. You’ll catch me for two or three months, I’ll be on a classic rock kick, and after that, it’ll be modern rock for awhile or even progressive rock. That’s probably why you hear so much diversity in our music. I’m really influenced by guitar-driven songs, songs that are centered on great guitar playing. You don’t hear much of that in the mainstream anymore.”

It’s more than just the guitarist’s eclectic taste that gives The Rob Wade Band their wide-ranging sound; the members themselves contribute to the array, as well. The addition of Parr, who joined in the summer of 2010, adds what Waltman describes as “a different dynamic that a lot of other bands don’t have.” Parr’s presence has opened up an entirely new realm of possibilities that Waltman and company continue to explore.

“There are so many different things we can do with a female singer,” said Waltman. “We do a lot of originals, but add some covers into the set. With the female vocals we can do an Adele or Lady Gaga song.”

RWB’s  newest recruit is Williams, who is currently studying music performance at Washburn and is a member of the drum line. He has Waltman particularly excited. Williams first came to the band around six months ago as fill-in drummer for one show, but that quickly turned into a full-time gig.

“Nico stepped in and added his own dynamic to the old songs,” said Waltman. “At first, I was thinking he’s destroying the song, but once I really listened to what he was doing, I found it was much better than the original. I really believe that if he sticks around, within a year he’ll be one of, if not, the finest drummers in town. He’s got great chops.”

The culmination of this vast array of talent and influence can be heard on the band’s album, “Basement Chronicles,” which was given its name in tribute to the band’s basement rehearsal space. Edgy and energetic rockers like “Cold Hard Bitch” and “Bad Mo’s” rest comfortably alongside the steel drum-flavored toe-tapper “Good Times” and anthemic “Highway.”

While the band’s entertaining live performance, complete with a light show and flamboyant stage garb has been an effective means to promote the album, RWB is attempting to see their tunes go viral via a series of pro-shot music videos. With videos for “Good Times” and “Cold Hard Bitch” posted on their website, the band’s most recent foray into the world built, and then abandoned, by MTV will be debuted on April 28th at Skinny’s Sports Bar & Grill, 4016 SW Huntoon St., during a video release party for the song “Summer.”

Themed around its title, the video was filmed at Lake Perry and during a pool party, the band played and featured Washburn cheerleaders.