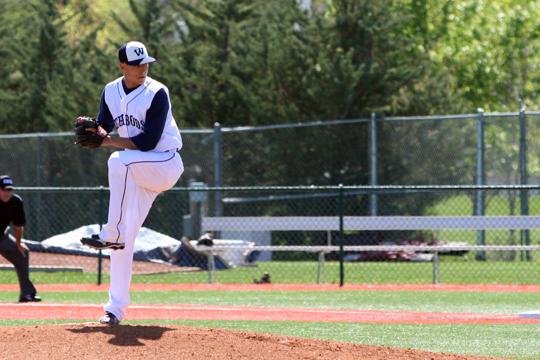 Wind up Junior pitcher Brett Ash picked up his third win of the season last Friday in seven innings pitched. Ash gave up three hits and no runs.

Offense was the name of the game last weekend as the Washburn baseball team took on Missouri Southern State University in a four-game mash fest.

The Lions came into Falley Field after being swept in three games against the University of Central Missouri the previous weekend. Washburn continued MSSU’s struggles, taking three of four games from them.

On Friday, the two teams played a first game that was relatively sedate in comparison to the rest of the matchups. Junior pitcher Brett Ash opened up action on the mound for the Ichabods. Ash proved masterful from the bump as he took down the Lions, throwing a complete game, three-hit performance, including six strikeouts. Ash had a no-hit performance going through 4 and 1/3 innings before MSSU finally managed to break through. Washburn’s offense provided just enough pop to take the win, 3-0.

“Brett just did what he is capable of,” said Washburn Head Coach Steve Anson. “It was a great effort by him.”

In the second game, Washburn’s offense exploded early and often as the Ichabods, led by senior second baseman Boone Plager-who finished 2-for-4 with three RBI and a walk-as the Bods scored 12 runs on the Lions. Senior pitcher Kerry Schachenmeyer tallied the win with a six-inning performance, including two strikeouts, while spreading nine hits over his stint on the mound.

On Saturday, MSSU got off the mat offensively, unloading an avalanche of runs. After a rain delay, the first game would turn into a one-sided affair in the Lions’ favor. Led by junior infielder Sam Ryan, who had a game-high seven RBI, MSSU started slowly as neither team was able to get on the board in the first two innings. From the third inning on, however, MSSU pummeled away at the ball as they scored three in the third inning, six in the fourth inning and three more in the fifth inning. They would finish off the game, scoring 14 runs on 13 hits while surrendering just one hit.

“It was a great team effort,” said Ryan. “It was nice to get this one to help put the brakes on a tough opponent.”

After taking a beating from the Lions, Washburn’s lineup awoke in the rubber match of the weekend. In a wild game that featured three lead changes and a tie, the Ichabods turned to a platoon of pitchers with no one lasting more than four innings in the game.

After jumping out to a one-run lead in the first inning, MSSU reeled off six straight runs in the second and fourth innings to build a lead. Washburn responded by scoring a combined seven runs in the middle third of the game. The Lions wouldn’t give up, however, as they clawed back into the game, tying it in the top of the ninth with a three-run rally. Pinch hitter junior catcher Richard Swan came up in the bottom of the ninth with two runners on and laid down a single to left field, scoring the go-ahead run for the win.

“This was a gutsy win for us,” said Anson. “I’m just glad we were able to get this one back.”

Looking forward, Washburn looks to take on a four game set against Lincoln University (Mo.) over three days this coming weekend.  Washburn is currently in fourth place in the MIAA while LU will continue to look for just its fourth win in the conference as the Blue Tigers attempt to climb out of the conference cellar.