The Washburn Review • May 2, 2012 • https://washburnreview.org/12598/features/senior-artists-display-their-art-off-campus/ 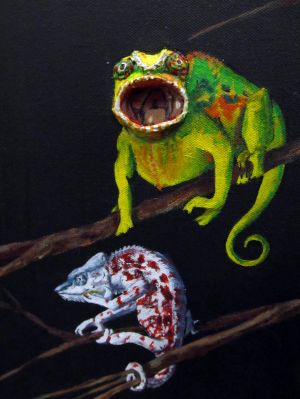 You might put “Pen to Paper” while peering “Through the Looking Glass.”

These two senior exhibits are just a couple of many exhibits new to campus and a few other locations around the city of Topeka. The exhibits are part of an exit requirement of seniors pursing their Bachelor of Fine Arts degree.

“For scientific illustration, the main purpose is to educate and to give obvious information,” said Shelby Leach, senior fine arts major. “Not just to tell a story, because art itself is communicating and this is just being more direct and detail oriented.”

Although scientific illustration is the kind of thing you would find in textbooks, Leach says that her exhibit is more of a showcase of what you can do with that in mind.

Not so much scientifically speaking, another senior will mostly showcase his works of photography and digital media along with variations and manipulations of the two media.

“Pretty much everything influences my art because art is very adaptable to other forms, not just other things,” said Jason Gwaltney, senior fine arts major. “It’s used for so many purposes, but it can go so well with literature, music, psychology and everything else that it’s able to interact with in every aspect of the world pretty much.”

Gwaltney likes the interaction and being able to throw his own twist on it. His  emphasis is on photography and computer graphics.

For Leach, the influences were a little more straightforward. She credits mainly biology, some anatomy and her pet chameleon for that aspect of her work.  For her favorite piece in her collection, Leach couldn’t decide between two.  Either her more abstract piece, a painting based on a kidney structure, or a digital work of specific anatomy based off an imaginary creature.

Like most of the approach Leach uses in her art, her choice of a title for her exhibit was to the point.

“When you have science, it’s pretty much straight forward,” said Leach. “It’s pen to paper.”

“Through the Looking Glass” is Gwaltney’s exhibit title, although he got the idea from the sequel to “Alice’s Adventures in Wonderland.”

Gwaltney describes his personal attachment of the title further as more along the lines of behavioral, humanistic and missed assumptions in psychology. He views this as a different approach to how we view ourselves, others and the world around us.

Leach’s gallery talk took place Monday, April 30. As part of the talk, Leach spent a good part of the show going through a step by step creation of scientific illustration for the art department students and faculty in attendance.  Her exhibit will remain displayed at Barnes and Noble through May 14.

Gwaltney’s work will premiere as part of May’s first Friday art walk at the Upstage Gallery.  His gallery talk will be held at the art building at noon, Friday, May 4.  Later that evening, his gallery reception will be held from 6 to 8 p.m. at the Upstage Gallery.  The gallery is located at 720 S.W. Jackson in the Jayhawk Towers.  Gwaltney’s exhibit will be displayed May 4 until June 1.