The Washburn Review • May 2, 2012 • https://washburnreview.org/12560/sports/wu-to-face-emporia-state-saturday-for-senior-day/ 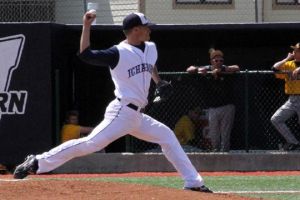 Facing a six-game losing streak, the Washburn baseball team was looking for anything to get them back on track. They found what they needed headed into this last weekend and were able to pick up three wins out of four games.

On April 28, the team traveled to face Northwest Missouri State in a four game series. The first game did not look extremely promising as the defense gave up three runs in the first inning.

However, the bats of the Bods battled back and put five runs on the board through the next six innings. The game was tied 5-5 heading into the seventh inning.

Junior infielder Brad Alberts was able to get on base with a single and later scored. The defense held tough, and the Ichabods won the game, 6-5.

Senior pitcher Kerry Schachenmeyer realized that this was a major difference in the team from the beginning of the season to the end.

“When we were down, it was hard to get anything going for the team,” said Schachenmeyer. “Now, we are just consistently hitting the ball and scoring runs; it’s a great way to head into the post season.”

Schachenmeyer started the game and felt relaxed and confident up on the mound through the game, thank to the offensive production the Ichabods manufactured.

The Ichabods were able to take the second game, 12-8, with seven of the starters having at least two hits apiece.

“It is so much easier to just settle in and throw strikes when the offense is putting up numbers like ours,” said Schachenmeyer. “It’s easier to pitch and keep them from scoring 12 runs than it is shutting them out.”

The second day of the series saw the Bearcats pull off the upset in game three by hitting a walk off grand slam in the last inning to win, 9-8.

However, this irritated and pumped up some of men in blue, especially junior catcher Richard Swan. During the final game, he went 3-for-4, driving in a season high five runs and hitting a pair of doubles.

“I always feel relaxed before games,” said Swan. “But this was the most relaxed I’ve ever felt up at the plate.”

With these wins, the Ichabods control their own fate headed into the post season. With four games against rival Emporia State, every win brings their chances of getting into the MIAA championship closer.

If playing against a rival team for a chance to make the post season is not enough motivation for the Bods, Senior Day is on Saturday at Falley Field, and everyone wants to go out with a bang.

“One of our goals is to beat Emporia every year,” said Swan. “There is no better way to send out the best senior core I’ve ever played with than to beat Emporia and play in the MIAA.”