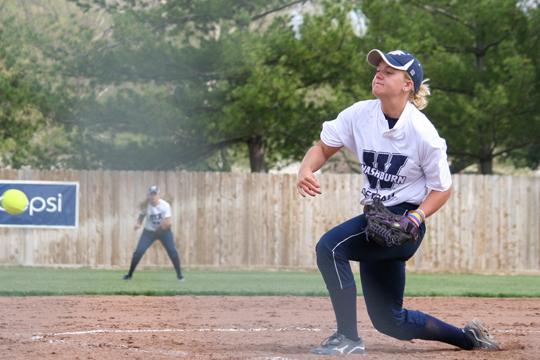 Breaking Even Freshman pitcher Kayla Oldham unleashes a pitch during a recent game.

The Washburn Lady Blues season came to an end with a 9-6 loss to Missouri Western at the MIAA Postseason Conference Tournament. Washburn ends the season 19-24.

The Lady Blues started off the game in fine fashion scoring three in their first at bat. After Katie Schroeder led off the game with a single, she moved to second after Lindsey Moore was hit by a pitch. Alex Zordel drove in Schroeder with a single to right field and then Moore would score on a wild pitch moving Zordel to second. Britny Cushing singled to right scoring Zordel staking the Lady Blues to a 3-0 lead. Howver the Griffons scored two in the bottom of the first to cut the Lady Blues’ lead to 3-2. During the Griffons at bat in the bottom of the second, the teams had a 50-minute lightning delay sending the teams off the fields and back to their vehicles.

Washburn scored two runs in the top of the sixth inning on a pair of RBI singles by Schroeder and Moore, but left two runners on to end the threat. Missouri Westen added two more insurance runs in the bottom of the sixth putting itself up 9-6 and the Lady Blues put two runners on in the bottom of the seventh but would not score as the Griffons closed out the game and the Lady Blues season.

Washburn pounded out 11 hits in the game with Schroeder, Cushing, Shelby Erickson and Bell each recording two hits. Moore (7-11) took the loss in the circle allowing six earned runs before giving way to Kayla Oldham who pitched two innings allowing a pair of unearned runs.