The Washburn Review • May 8, 2012 • https://washburnreview.org/12497/arts-living/artist-reinvents-everyday-objects/ 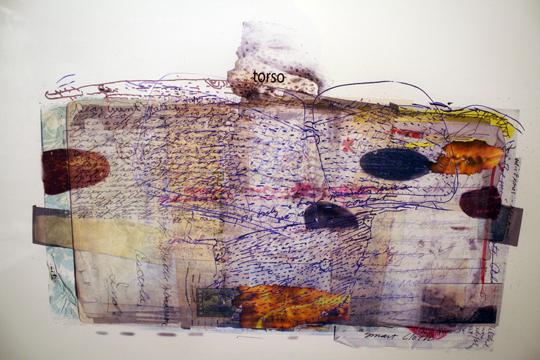 What You See Isn't What You Get Some of the art featured in this exhibit may look like common items, they are not.

Carol Ann Carter not only consistently strives for meaningful work, but gives patrons the opportunity to connect with her art by more than just looking at it.

Art isn’t always a visible texture. Sometimes it’s about what you can feel.

“She’ll start with cloth, but that’s just the beginning,” said Sherry Best, gallery director at the Alice C. Sabatini Gallery at the Topeka and Shawnee County Public Library.  “She’ll use wire, paint, stitching- what we’ll think of sometimes as traditional quilting techniques and traditional sewing techniques, but she’s not using them in a traditional way.”

The non traditional and mini-retrospective exhibit of Carter’s work “Threading Body & Space” is on display at the Sabatini Gallery until May 18.

While some elements within the pieces can be recognized as realistic, they’re mainly used for details or surface decoration. The pieces Carter has created actually stretch that boundary of what an object can be, would be or should be.

“There’s apron forms, jacket forms, dress forms, purses and bags and even shoes,” said Best. “None of them can necessarily be worn, but they’re all about the idea of those garments and how they decorate the body.”

Along with the different forms are variations of bundles.

These bundles may consist of paper, letters, outdated currency and sometimes even old birthday cards.

“There are things that have been sent to me in good faith and love,” said Carol Ann Carter, artist of the exhibit.

Carter describes herself not as an independent artist, but a teaching artist.

She is currently a professor at the University of Kansas, although she has held many other teaching positions at various colleges and universities throughout the United States.

Speaking toward the process of Carter’s work, Best has a few theories.

“Sometimes she’ll get tired of a piece, take it apart and use the parts for something else,” said Best. “So I think really for her, the material itself is only a starting point or jumping off point for developing an idea. Then when she combines things, she’ll try all different kinds of combinations and then finally settle on one that she thinks is working.”

At the artist’s reception, Sunday, she went over her ideas on the exhibit, while explaining where she gets her ideas and how she developed them for her current and also future projects.

“Because of a lot of what she’s doing is responding to the feel of cloth, we wanted people to be able to feel what she’s feeling, but without putting the work at risk,” said Best.

To make this happen, a touching table was put together.  Carter supplied many materials from her studio for the table, allowing guests to see, feel and be able to touch many of the same materials in the exhibit,  thus really getting the chance to experience what the artist herself was experiencing.

Whenever a student asks what they should be doing, Carter only replies with a question. She asks them what their hands want to do.

“I go where my hands and my heart want to be,” said Carter.

The Topeka and Shawnee County Public Library is open daily, with hours of operation varying. Monday through Friday the library is open from 9 a.m. to 9 p.m., Saturday’s hours are from 9 a.m. to 6 p.m. and Sunday’s hours are from noon to 9 p.m. There is no admission cost to the library or it’s Alice C. Sabatini Gallery, which shares the same hours also.

The exhibit is currently open at the Sabatini Gallery.