The Washburn Review • May 10, 2012 • https://washburnreview.org/12491/news/yearbook-unveiled-with-farley-appearance-bobblehead/ 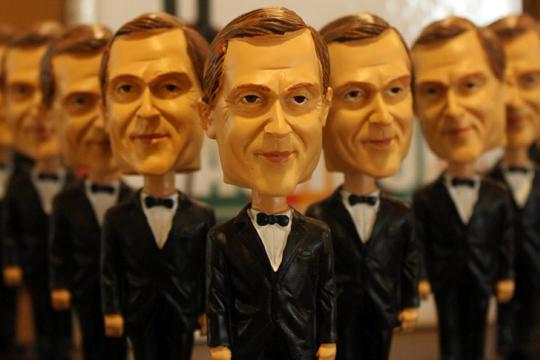 A Nod to History The bobbleheads are a model of Washburn President, Jerry Farley. They are a promotional gift with the purchase of a Kaw yearbook. The bobbleheads and the yearbook were unveiled on Monday.

The chronicle of Washburn history took another step forward Monday as the 2012 edition of the Kaw Yearbook was unveiled at a press event in the Memorial Union main level.

Matt Kelly, editor-in-chief of the publication, presented the results of his staff’s efforts to Washburn President Jerry Farley and assembled campus community members.

The book is themed this year off of NBC’s television show, “The Office” and features an homage to Dwight Schrute, a character on the show who had a bobblehead of himself made on one of the episodes of the popular program. The yearbook features a Washburn-centric image of Farley’s visage atop the body of a bobblehead adorns the front cover.

The effort to get the bobblehead idea off the ground however was one that took more effort than many would believe.

“I went into the process not really expecting it to happen to be honest,” said Kelly. “We just kept working at it as the fall semester went along.”

Indeed, while Farley was not opposed to the idea, some of his executive staff and students he talked about the project with had reservations. Kelly was asked to present a proposal for the project that clearly defined what it was he wanted to do.

“We asked him to come in and really outline what it was he was asking for,” said Farley. “He came and nailed it so it was a go after that.”

As for the bobblehead project itself, Farley felt honored to be a part of something unique that would help preserve the memory of Washburn during the 2011-12 academic year.

“I think it was an unique idea that was something that I don’t think anyone had ever thought about before,” said Farley. “[Kelly] did a great job of selling the idea and what you see today is a result of a lot of hardwork on his part.”

Besides the novelty of the bobblehead item, the yearbook itself was also a labor of love as Kelly, along with Tesa DeForest, graphic design editor, and Josh Rouse, photography editor, put together a book that won more than 17 awards at this year’s Kansas Association of College Press conference in Salina, Kan.

The book features stories and photography that highlight people around campus that President Farley felt had made an important contribution to the university.

“Having stories about people like [Alan Bearman, dean of libraries] will make this book so memorable for people,” said Farley. “They’ll be able to read about the wonderful people we had here making Washburn a great place to go to school.”

For those interested in purchasing a 2012 yearbook, orders can be taken in the Washburn Student Media office, online via the Kaw Yearbook Facebook page or at the table set up during graduation May 12 in Lee Arena. The book will cost students $15, while all other customers will need to pay $30.

The bobblehead comes free with the purchase of a yearbook.