2012 Kansas Hall of Fame to be held in Topeka 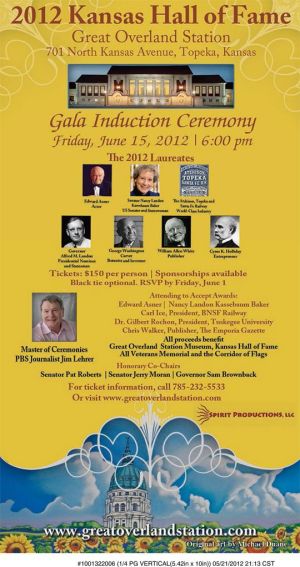 Beth Fager, Hall of Fame Coordinator, said, “We started the Kansas Hall of Fame to honor great Kansans and to share their achievements and values with people across the nation.  We believe this class of Laureates is a great representation of those Kansas values.  This year’s Ceremonial Gala will be a very exciting and meaningful event.”

Wichita native Jim Lehrer, Executive Editor of the PBS Newshour will serve as Master of Ceremonies at the Gala.

Hall of Fame Gala tickets are limited-for information call 785-232-5533 or go to www.greatoverlandstation.com.

Actor Ed Asner is a native of Kansas City, Kan.  He became a beloved addition to millions of households through his character, Lou Grant.  First on the “Mary Tyler Moore Show” and then as the star of the spinoff “Lou Grant Show.”  Asner’s cantankerous newsman possessed courage and integrity.  He is the only actor to have won an Emmy in both drama and comedy for the same character.  He has earned six Emmys, more than any other actor and five Golden Globes.  Today’s generation will recognize him as the voice of Carl Frederickson in the 2009 Disney-Pixar animation “UP,” which was the first animated and 3D film to open the famed Cannes Film Festival 2009, and won a Golden Globe and an Oscar for Best Animated Feature in 2010.  The feisty 82 year old Asner has been seen twice on primetime in March of 2012; ABC’s “Hawaii-Five-O” as smuggler in Cleveland with “MTM” alum Betty White.  A graduate of Wyandotte High School, Ed maintains close ties to his Kansas roots.  He has served as President of the Screen Actors Guild and is an outspoken advocate for many causes, often championing the disenfranchised.  Mr. Asner will attend the June 15 ceremony to be inducted into the Kansa Hall of Fame.

George Washington Carver is one of the most recognized figures in American history.  The subject of hundreds of books, articles and documentaries, his iconic journey from slavery to scientist is known by virtually every school child in the nation.  Carver’s reputation is based on his research and promotion of alternative crops for cotton, such as peanuts, soybeans and sweet potatoes.  Carver developed and promoted about 100 products made from peanuts; including plastics, gasoline, paints and nitroglycerin.  What is not widely known is that Carver’s formative years were spent in Kansas in Fort Scott and Minneapolis.  Those first years of freedom were spend observing the flora and fauna of the Kansas countryside, absorving and interpreting the wonder of the natural world, a skill that would take him to the Tuskegee Institute as one of the most respected scientist, inventors and educators of all time.

Jean Ney, Fine Arts Director of the Kansas City Public Schools remarked, “We were thrilled to learn of Ed Asner’s and George Washington Carver’s induction into the Kansas Hall of Fame. Their astounding bodies of work are reflections of their creativity, curiosity, and sheer determination. These traits were instilled in early life and are the same traits we strive to develop in our students in the Kansas City, Kansas Public Schools today. We are proud of Wyandotte High School Class of 1947 graduate Ed Asner and Minneapolis, Kansas native George Washington Carver and congratulate them on lives well lived.”

When Nancy Landon Kassebaum ran for the United States Senate from Wichita in 1978, her slogan was “A Fresh Face: A Trusted Kansas Name.” Hers was a unique face on the Senate floor where she was the only woman at the time. She gained the respect of her colleagues and the nation with her independent thinking and her ability to work effectively in a bipartisan climate. Born in Topeka, Nancy became active in community affairs of Maize and Wichita, serving as a member of the Maize School Board, Vice-President of radio station KFH-KLZS in Wichita, and President of the Wichita United Fund. Nancy’s political education and her background in management, combined with her Kansas common sense, served her well during nearly twenty years as a Senator. She is married to her former Senate colleague, Howard Baker, Jr.

The Atchison, Topeka and Santa Fe Railway, one of Kansas’ greatest business success stories, gave rise to dozens of new towns as it crossed the state.  Its storied history is memorialized in a song of the same name.  From its founding in 1859 and the laying of first tracks in 1869, the railroad has continued to be a major national transportation company, even since the merger in 1995 that created the Burlington Northern Santa Fe Railway, now the BNSF Railway.  It is worth noting that Kansans continue to occupy key positions within the BNSF, with Salina native Matthew Rose serving as Chairman and CEO, and Topekan Carl Ice serving as President and COO.

Alfred “Alf” Mossman Landon, raised in Independence Kansas, became a millionaire in the oil business before he was 30 years old, but his passion was government. Active in the Republican party in Kansas for years, he was elected Governor of Kansas in 1932, and was the only Republican governor in the nation re-elected in 1934 during the Great Depression. Landon was the GOP candidate chosen to face President Franklin Roosevelt in the 1936 election. An extreme underdog, Landon lost the election in a landslide, but won the nation’s admiration. Landon’s business judgment translated into fiscal conservatism as an elected official, but he also believed government had an important role in addressing social issues. After his election loss, he completed his term as Governor, then returned to the private sector and remained a national figure and advisor to Presidents.  His Topeka home welcomed the most influential people of the time, including President and Mrs. Ronald Reagan.

William Allen White, the voice and soul of Kansas for decades, placed Kansas in headlines all over the world from his own front desk at the Emporia Gazette.  Perhaps best known for his editorial, “What’s the Matter with Kansas?”. White’s plain-spoken, insightful editorials struck a chord far beyond the boundaries of his native state, and though he traveled extensively, Kansas remained his home. White is the namesake of the prestigious William Allen White School of Journalism at the University of Kansas.

Cyrus K. Holliday,is most well-known as the founder of the Atchison, Topeka and Santa Fe Railway.  A staunch supporter of Free State Kansas, Holliday came from Pennsylvania to the Kansas Territory in 1854 with energy and vision, and it would take both to endure the challenges of Bleeding Kansas and the Civil War. Not only did Holliday endure, he left an indelible mark on his new state, as well as on the national landscape. As a founder of Topeka, he was instrumental in that city’s becoming the state capital.  His optimism and business acumen were instrumental to the growth of our state.  In 1859, he chartered a new railroad that would eventually traverse the exotic and little-known American Southwest and reach the shores of the Pacific Ocean.  Holliday’s understanding of the power of promotion set a standard seldom replicated and gave rise to a mystique surrounding that railroad that continues to this day.

The Great Overland Station is now featuring an exhibit for the 2012 Laureates of the Kansas Hall of Fame in the museum’s Fink Exhibit Gallery.

Ed Asner’s 1971 Emmy Award has been put on display along with the desk and an original script from the “Mary Tyler Moore Show.”

Also on display are original letters written by George Washington Carver and Cyrus K. Holliday, a photo album and cane that belonged to Alf Landon and a huge whistle from a Santa Fe steam locomotive.

The exhibit, developed specifically for the Kansas Hall of Fame, will be on display through July 15.  Museum hours are 10 am-4 pm Tuesday-Saturday and 1 pm-4pm Sunday.  Last admission is at 3:15 pm.