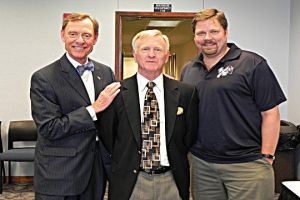 Jerry Farley, Washburn president, spoke on July 6 about the 15 year progress at the university. Washburn University has gone through some major changes in the years up to 2012.

“The university went from being a non-traditional school of students who were part-time, to more traditional students,” said Farley.

Washburn’s improvement includes the constructing of the Living Learning Center which is a recent resident hall for students.

“The Living Learning Center has really changed the dynamic of the campus,” said Farley.

Washburn’s campus will also include more buildings within the next five years, and more renovations are happening in Morgan Hall this summer. In the 15 year progress, Washburn has also created more of a less “sleepy” campus into an energetic and lively campus, according to Farley.

Next year the campus is objected to start on the planning process for the new buildings on campus. The university will possibly be working with MIT in the near future to coincide with the classroom and learning with Washburn’s instructors.