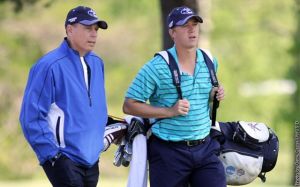 After leading the Washburn golf program to its first five MIAA Championships and to 10 NCAA Tournament appearances, head coach Doug Hamilton has turned in his resignation to gain more family time with his own kids and their activities, as well as being able to focus 100 percent of his work time to his new position with the Kansas Building Industry Workers Compensation Fund.

“Doug did an outstanding job with the golf program returning the Ichabods to a conference, regional and national contender every year,” said Loren FerrÃ©, Washburn Athletics Director. “From the teams success on the course and in the classroom he will be missed and we wish him and his family the best in the future.”

Hamilton just wrapped up his 10th season as the Ichabods’ head coach leading them to a second-place MIAA finish and a 15th-place finish at the NCAA Men’s Division II Championships.

“The fact that I have coached the golf team at Washburn for 10 years boggles my mind,” Hamilton said.  “Time has flown by and I have loved every minute of it. I remember when I took the job I thought that I might do it for a couple of years. I never thought it would end up being one of the most rewarding experiences of my life.”

“Over the years I have always had so much fun traveling with the guys to all the different tournaments, although, the guys might tell you the trips home weren’t much fun if we didn’t play well,” Hamilton said. “I’ve been blessed to have so many quality young guys come through our program.  I keep in touch with almost all of them and I love hearing from them when they text me or call.  Those relationships are the things that I value the most. I am extremely proud of all the guys and their accomplishments. With several conference championships, seven trips to the National tournament and tons of individual awards and tournament victories, we have a lot to be proud of over the past 10 years. I have had so many great experiences from just getting to go to our first ever National Tournament (2003) to when we were in contention for the national championship on the back 9, of the final round in 2007, to being selected as the coach for Team USA in Japan in 2009. It has been unbelievable and I know when the fall season rolls around in a few months that I will miss it terribly.”

A search for the next head coach will begin immediately.