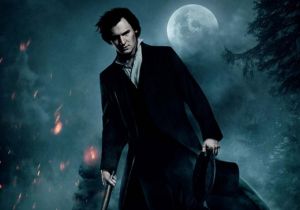 Remember in your history classes reading about the 16th president of the United States being a vampire hunter?  Me either.  I know that the film “Abraham Lincoln: Vampire Hunter” is based off a book by Seth Grahame-Smith and I want to know how in the hell this idea came about because honestly, I think it’s awesome.

I know a couple of my friends walked out of the film because they found it to be too serious and when you put one of our nation’s presidents in a vampire hunting movie it should come off as funny.  Since I work at a movie theater and had already seen a few clips of the film before I officially saw the whole thing I knew that it was more of a serious movie.

The film is directed by Timur Bekmambetov and produced by Tim Burton and Jim Lemley.  Benjamin Walker plays as Abraham Lincoln and I believe he does a great job doing it.

The film begins with Lincoln’s mom being murdered by a vampire.  Years later Lincoln meets Henry Sturges (Dominic Cooper) who teaches him the truth about the existence of vampires and how to hunt and kill them.

I was impressed out how the film tied in real historic events with the whole vampire thing.  The film makes it seem like almost all of the South during the civil war were vampires.  The leader Adam (Rufus Sewell) wants to turn the United States into a nation of the undead.

The 3D in this film was well done and I felt it added in an extra element to it.

Did I enjoy it?  Well you have to come into this film with an open mind.  It is simply just a fictional story with some non-fiction characters  and events added to it.

If you are going to watch a vampire hunting movie and are sick of all the “Twilight” crap like I am, then I think you will enjoy the film but if you are going to see a comedy or a history movie then this one is in no way it for you.

It is entertaining, well put together but honestly it is one of those movies that you would be perfectly fine seeing in on DVD or Blu-Ray.