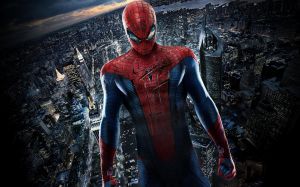 It was only ten years ago that I went to the movies to see “Spider-Man” swing on the big screen for the first time.  I really did enjoy Sam Raimi’s “Spider-Man” movies and thought that the cast of his three films did well themselves.  I know that “Spider-Man 3” got lots of criticism and yeah it was a cluster of a billion different things going on but it was still entertaining.  I had heard right after “Spider-Man 3” that Raimi was working on a fourth Spider-Man film, which I did not like because I felt that the third film wrapped everything up.

I was shocked to hear that Raimi would no longer be making anymore Spider-Man movies due to some disagreements with Sony but I was also shocked when I found out that Sonly would be remaking/rebooting the whole series just ten years later and only five years since the last Spider-Man.  After seeing the first couple of trailers, Marc Webb’s “The Amazing Spider-Man” caught my interest.

I admit that I was not looking forward to seeing Spider-Man’s origin story all over again but Webb took it in a whole new direction.  I was glad to get some more background into Peter Parker’s past and his parents and why he lives with his Aunt May and Uncle Ben.  It was a great relief to my ears to not hear Peter Parker commentary at the beginning and end of the film.

After stopping a kid from being picked on, Peter Parker is beat up by a bully named Flash (played by Chris Zylka) and rescued by a beautiful student named Gwen Stacy (played by the wonderful Emma Stone).  Unlike Mary Jane Watson, who came off as the popular girl, never noticing Peter, Gwen Stacy notices Peter right away and takes a strong interest in him.

Peter finds a clue in the basement of his Aunt and Uncle’s that leads him to the company of Oscorp and to his father’s old partner Dr. Curt Connors (played by Rhys Ifans).  Connors, who only has one arm, is determined to find a way to cross lizard DNA with human DNA to re-grow human parts.

At Oscorp is where Peter is bitten by a radioactive spider and then next wakes up on a subway to his new spider like powers.  I enjoyed this version better on how he learns to control his new powers and it was interested seeing him not have web powers but have to create the web cartridges.

Dr. Connors is pushed by Oscorp to hurry up on the cross-species project and injects himself with the lizard DNA that does in fact re-grow his arm but also turns him into a giant, mutated lizard.

I won’t go too much further into the film but will say that I did enjoy this version better than the other three.  I felt more connected with this Peter Parker and enjoyed him as Spider-Man much more.  It was nice to see the main girl in this movie, not just a helpless one that Spider-Man has to constantly save but one that is sort of a bad ass herself.

The special effects in the movie were well done and if you see it in 3D, there were some pretty awesome effects with that.