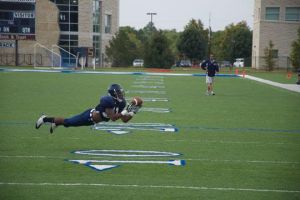 The Washburn Ichabod football team had their first full on scrimmage on Saturday, Aug.18.  It was a time to see how all of the hard work the players put in during summer conditioning was paying off.  It was also the first glimpse at how this team will fare once the season is upon them.

The special teams units took to the field first to launch numerous balls downfield.  This part of the practice was non contact, except for the linemen.  Returners were on the other end awaiting the ball as it came in. After the special teams finished up, the Bods moved on to offensive drills.

The offense featured two sophomore quarterbacks, Mitch Buhler and Joel Piper, both fighting for the starting position.  Buhler got most of the reps with the first team offense while Piper split time with the first and seconds teams. Both quarterbacks struggled to move the ball down the field against a veteran Ichabod defense.

The backfield is wide open as Washburn lost both its starting running back and full back. Running backs Donnie Lockhart and Hayden Groves both powered through tackles and on numerous occasion foughtfor extra yardage.

The offense is not as far along as the defense right now but that is to be expected this early in the preseason.  The learning curve is usually not as steep for the defense.

“They’re young guys who are very talented and they know the offense.  It will take more time for them to get more comfortable,” said graduate assistant Dane Simoneau.  “They are still learning their drops and when to release the ball at the right time.”

Washburn’s defense stole the show for most of the scrimmage. The Bods return eight starters from last year’s squad.  Their aggressive, hard-nose mentality took its toll on the inexperience Ichabod offense.  The defense forced many three and outs and picked off various Washburn quarterbacks multiple times.

Linebackers Bryce Atagi and Jahmil Taylor demonstrated their speed and punished the ballcarriers each time they had the ball.  Some defensive backs that really stood out were Jaime Myers and Arlan Waller.  Waller made an amazing interception that required precise body control to change direction, make the diving catch, and pull it in.

“I think we’ve made big improvements”, said defensive coordinator Brock Luke. “We play less than two weeks from now so we really need to start honing in on Kearney.”

Head coach Craig Schurig had high marks for his defense at the end of the scrimmage as well.

“It was really dominated by defense.  I was really happy with the secondary,” said Schurig. “They had more interceptions than I have seen in a long time.”

Schurig also complimented the run game on the offensive side.

“We got some things going with the run game,” said Schurig. “We could see though that there were some problems with indecision among the quarterbacks with their receivers.”

With the defense being as solid as they are and the offense progressing every day, the team is showing that they will be ready come Aug. 30 as they play host to the University of Nebraska-Kearney Lopers.