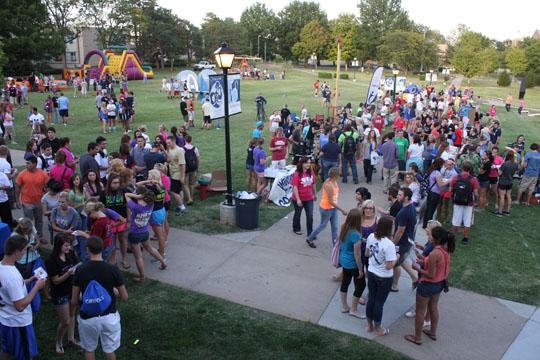 Come Together Students gather on the lawn in front of the Memorial Union as part of the 2012 Washburn University Welcome Week. WU Fest was open to all students and served as a nice round-up of the week's activities.

WU Fest started at 5:15 p.m. on Aug. 20 on the lawn in front of Memorial Union and Traditions Night started at 8 p.m. at Yager Stadium. It consisted of carnival games and tables from student organizations on Washburn’s Campus.

“I have been at WU Fest the last two years and I participated in the dunk tank, the obstacle course, the swing, the photo booth, the balls that people get in and walked around-in and I enjoyed having the free food and other free items that were handed out by the different student organizations and non-student organizations that were on campus tonight,” said Ashley Johnson, junior art major. “It was also a good event to bring my roommate who is a Washburn [Institute of Technology] student to.”

WU Fest was open to students and faculty and it was a way to wrap-up Welcome Week by allowing the campus community to come together again as classes started.

“I came to this event because I was interested in what I could do here,” said Kerry Roney, first year Washburn Institute of Technology student, majoring in computer programming and in the bridge program between Washburn Tech and Washburn University. “It was great to be able to ride all-of the rides, and it was like a carnival.”

“We don’t have events like this for our colleges at home,” said Heng Zhong, junior, financial management major, from Zhejiang Province, China. “They only do this for professional teams where I live and it was amazing and exciting to see everyone here at this event. It makes me excited to come to the games and I am really excited to go to my first American football game.”

Traditions Night was meant to inspire students to support Washburn’s athletic teams and the event was also meant to promote school spirit.

“This makes me want to go to the athletics games such as, American football, volleyball and basketball,” said Zai Yujie, junior business major, from Hubei Province, Wuhan City, China. “It makes me excited for the sports season.”